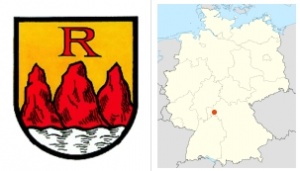 Rothenfels (Königseck-Rothenfels), since 1805 belonging to Bavaria, Germany (coordinates: 49° 53′ 30″ N, 9° 35′ 30″ E), previously a gravure in Allgäu (capital, Immenstadt). In the spring of 1528 horsemen and several hundred foot soldiers were organized to find Anabaptists. A number of the Anabaptists were caught, but most fled. They were probably refugees from Switzerland (Bern, Zürich, and St. Gall). The magistrate and officials of the strictly Catholic lords of Montfort had the prisoners tried by the executioner of Kempten, who had long been willingly handling such cases. He was to proceed in accord with the decision of the Swabian League of February 1528, which stipulated that persons suspected of Anabaptism were to be removed from their proper jurisdiction and put to death without trial. The executioner could not make up his mind to do this. After a consultation lasting four hours his superiors rejected the decision of the League; they wanted to execute only those who refused to recant. The Rothenfels authorities turned to Memmingen to find an executioner, but very likely in vain. Probably it was impossible to eradicate the Anabaptists. The communities were all Protestant when, in 1546, a Smalkaldian army camped in Allgäu. The preachers were then admonished to convert the Anabaptists. If the Anabaptists were obstinate they were to be banished from the country and their possessions given to their children. In the adjacent Rettenberg territory (in the south of the bishopric of Augsburg, now Sonthofen district) Anabaptists were arrested in 1566 and 1568, who maintained contact with Moravia. In 1595 a church inspection revealed that "Anabaptists have again taken root . . . and had protection and lodging from our people." Books were confiscated, and their owners banished and threatened with loss of property and life. The neighboring prince-abbot of Kempten had seven Anabaptists executed at that time. In 1630 some Anabaptists were found in nearby Alpsee; this is the last evidence of Anabaptists here.