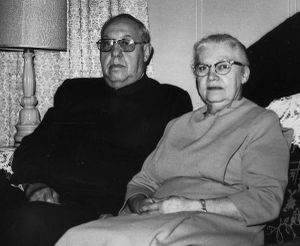 After their marriage, Irwin and Susan Schantz became actively involved in the Rocky Ridge Mennonite Mission near Quakertown, Pennsylvania. As a mission station, Rocky Ridge included persons from a variety of ethnic and cultural backgrounds. The Schantz’s experience at Rocky Ridge, combined with calls for workers in more remote North American places from visiting missionaries, led them to consider mission service.

In spring 1938, Irwin and Susan Schantz, together with Llewellyn and Edith Groff, moved to Rousseau, Minnesota. Linford and Ada Hackman, also from the Franconia Mennonite Conference in eastern Pennsylvania, soon joined them. The workers organized summer Bible schools and then Sunday schools. As the work expanded it became known as the Northern Light Gospel Mission. Their work eventually extended to the White Earth Reservation of the Ojibwe/Chippewa people.

In 1939 the Shantz family moved to Loman, Minnesota, virtually on the Canadian border. In November 1939 all the workers from eastern Pennsylvania were received as mission workers in the new Dakota-Montana district conference. On 10 June 1943 both Irwin Schantz and Llewellyn Groff were ordained as ministers at the annual meeting of the Dakota-Montana Conference.

By 1952 oversight of the Minnesota mission congregations had been turned over to the North Central Mennonite Conference (the Dakota-Montana Conference changed its name in 1945). Irwin Schantz looked across the Canadian border and began exploring mission possibilities in the Red Lake, Ontario area among First Nations communities.

Because many First Nations settlements were not accessible by car, Schantz returned to Pennsylvania for flying lessons, and obtained his pilot’s license as well the donation of a small two-seater plane. Thus 1953 marked the beginning of the Northern Light Gospel Mission in Ontario, with headquarters in an old mine office in Red Lake, though Irwin and Susan Shantz continued to live in Loman, Minnesota until about 1961.

The first mission stations were at Pikangikum and Poplar Hill, followed in 1955 by Deer Lake. Five other stations were opened in the next few years. Day schools were operated at Poplar Hill, Grassy Narrows and North Spirit Lake, though all closed when government schools were established. The Poplar Hill Development School, a residential school, began in 1962 when the government invited the Mennonites to establish the school. Decades later this school was among those involved in the residential school settlement between the Canadian government and former First Nations students who attended these schools.

In 1960 the mission was incorporated, and in 1965 the Northern Light Gospel Mission Conference was established with 12 congregations and 179 members. Irwin Schantz was also ordained as a bishop in 1965.

Irwin Schantz provided leadership of the Northern Light Gospel Mission until November 1982, when his youngest son, Merle Schantz, became the General Director of the mission. In 1982 the conference had 20 small congregations, with 17 in Ontario and three in northern Minnesota.

Irwin and Susan Schantz were pioneering missionaries—searching for new fields of outreach when they believed former projects had matured enough to turn over to others. This independent spirit also inclined them to maintain a distance from denominational mission boards, and to operate as a faith mission. In other ways the message of the Northern Light Gospel Mission was a traditional evangelical gospel. Over the years it encountered difficulty in responding to the growing First Nations desire to recover and maintain traditional native culture and spirituality.

The Northern Light Gospel Mission attracted many volunteers and short-term workers from eastern United States and Ontario Mennonite communities, exposing many of these people to First Nations life in Canada. Irwin Schantz’s life and work impacted the many persons who served the mission in diverse ways.

Ropp, Debby. “On wings of faith.” In On Wings of Faith: a tribute in memory of Irwin G. Schantz. Red Lake, Ontario: Northern Light Gospel Missions, 1986.