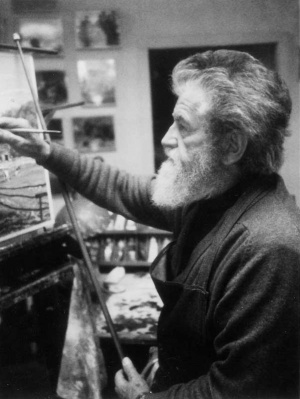 Oliver Wendell "Tom" Schenk: artist and photographer, was born 2 November 1903 to Andrew S. Shenk (1878-1956) and Rhoda E. Stemen Shenk (1879-1961) in the Mennonite community around Elida, Ohio. He was the third child in a family of six boys and three girls. He grew up on the family farm, but left home at the age of 17. He graduated from high school at Eastern Mennonite School in Harrisonburg, Virginia in 1923. In the 1930s he attended Goshen College for a time, but his free spirit led to disciplinary issues and he was expelled.

Early in his artistic career, Schenk worked as a commercial artist; he designed theater posters, billboards, and greeting cards. In Washington D.C., he met the cartoonist, C. K. Berryman, who advised him to roam the United States for at least 10 years, working in many places and asking a lot of questions. His subsequent travels took him to Chicago, Detroit, Philadelphia, Los Angeles, and to New York City, where he studied at the Art Students' League. One of the etchings he did while at the League, entitled "The Fo'c'sle", was purchased for the institution's permanent collection. During the Great Depression, Schenk lived the life of a hobo, hopping freight trains and living in hobo jungles across the United States. In 1933, while a student at Goshen College, Schenk drew a sketch of Christopher Dock, the early Mennonite educator in Pennsylvania. In 1963 he completed a painting of Dock that hangs at Christopher Dock Mennonite High School in Lansdale, Pennsylvania.

Some years later, Schenk designed a Coca-Cola advertising spectacular for Columbus Circle in New York City. He used the income from this project to purchase a small farm and 200-year-old log house in Bucks County, Pennsylvania, where he lived with his first wife, Vida Davis (whom he married in 1936), and four children for 17 years. During this period he worked again in New York City as a commercial artist and illustrator. He began to paint in oil and to pursue his long-cherished dream of being a fine artist with a studio on the Left Bank in Paris. He showed four of his small landscapes to the art director of the Ford Motor Company, who commissioned him to do paintings for the Ford Times magazine. He worked for this publication for 11 years, and three of his Ford paintings were selected for a two-year traveling exhibition that toured the world under the sponsorship of the United States Information Agency.

While using his camera to record potential painting subjects he saw around him, Schenk became an avid photographer. One photographic venture led him to sell the Bucks County farm and travel with the United States Navy as a photographer aboard the first nuclear carrier - the Enterprise - as well as a nine month tour of the Mediterranean with the Sixth Fleet.

Tom Schenk crossed the Atlantic Ocean 16 times, once in a submarine, and toured Europe on a motor scooter with his son Erich. He spent an autumn and winter in Munich, then went to Paris, where he found a studio on the Left Bank with a skylight and a view over the chimney pots of Paris. Schenk spent four years in Paris, where he met a young English artist, Anne Grant-Morris, who became his second wife. In 1966 they returned to the United States and lived in Somerset County, Pennsylvania, where their daughter, Penelope, was born. Tom and Anne were divorced in 1988.

During a tour of New England in 1970, the Schenks decided to move to Southwest Harbor, Maine, on Mount Desert Island, lured by the area's natural beauty and the wealth of painting subjects. One of Schenk's early Maine paintings, The Clamdigger, hung for a time in the office of the late Senator and Secretary of State Edmund Muskie. 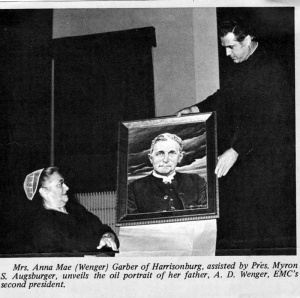 It was during these years that Tom Schenk painted the Anabaptist portraits that became widely known and reproduced. In 1972 he completed a set of three on Conrad Grebel, Felix Manz and Georg Blaurock for the Laurelville Mennonite Church Center. In 1975 he completed a painting of Menno Simons for Eastern Mennonite University. He also painted a number of portraits of the early presidents of Eastern Mennonite College.

In 1992, Schenk drove his Volkswagen camper to Alaska, fulfilling another lifelong dream. He spent the winter there living in a small cabin in Palmer; during his stay, he traveled with the Iditarod dog sled race, fished for salmon, and painted and photographed the breathtaking Alaska landscape. When he returned to Maine, he did several large paintings of Alaska, had two of his paintings reproduced as prints, and published a children's coloring book. Tom Schenk died on 17 September 1996 at age 92. He is buried in Southwest Harbor, Maine.

for the Laurelville Mennonite Church Center