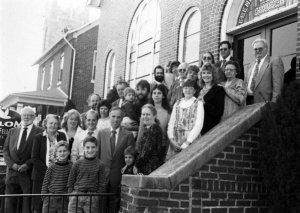 Early members of the congregation.
Photo courtesy of Richard A. Moyer 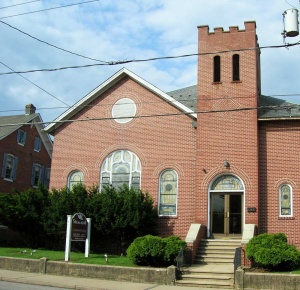 Six couples from Finland, Towamencin, and Perkiomenville Mennonite congregations met in October 1990 to consider church planting in the tri-borough area of the Upper Perkiomen Valley, about five miles (eight km) from several Mennonite churches. With assistance from Franconia Mennonite Conference mission secretary, Luke Beidler, the group met as a church planting on 30 January 1991.

Meetings were held in several locations until the brick meetinghouse at 104 Main Street, East Greenville was rented in September 1991 and purchased by Franconia Mennonite Conference for Shalom’s use in March 1992. The congregation repaid three-fourths of the $100,000 purchase price. A modular building on the back lot provided three rooms for classes and a nursery.

The group gathered on an eventful day, 10 February 1991, to process which spiritual gift each core group member could bring to the church. By the conclusion of the meeting David K. Benner and Richard A. Moyer were affirmed as co-pastors, and others had volunteered for the ministries of mission, worship, nurture, facilities, fellowship, secretary and treasurer.

David Benner resigned as pastor in April 1996 to work in construction. Upon Benner’s resignation, Richard Moyer finalized plans for an elder team to lead the church. In July Ron Delp and Todd Delp were installed as elders to work with Pastor Moyer. The congregation called David Benner back as co-pastor “due to his new availability and desire to minister,” the 15 February 1998 bulletin announced. In September 2001 Benner resigned to work with his wife, a physician in private practice. The congregation called Duane Hershberger to serve with Richard Moyer in 2001.

The name Shalom was selected in 1991 for its emphasis on “salvation, wholeness, and peace.” Members of the congregation were working at health and wholeness in Honduras, and peacemaking was a concern at the start of the Persian Gulf War.

In 1992 the Clothes Line ministry was begun, giving free clothing from a garage behind the meetinghouse. This ministry continued in 2012 under the guidance of Fern Moyer.

God was at work as persons’ bondage was broken and lives were rededicated to Christ. In the first six years 18 persons were baptized. Persons began to use their spiritual gifts in new and expanded ways.

The average weekly attendance peaked in 1995 at 61 persons. It declined from there until 2005. When yet another key family relocated that year and Pastor Duane Hershberger resigned, the group decided to stop meeting for Sunday morning worship to engage in several months of prayer and evaluation. The group met again on 28 August 2005 and decided to close the church.

After the church had been closed for some time, a few former members of Shalom Fellowship restarted as Peace Mennonite Church of East Greenville in 2006.

Moyer, Richard A. “A History of Shalom Christian Fellowship.”  2001.