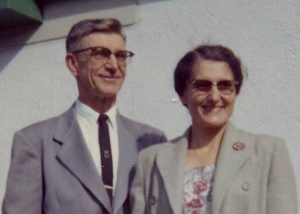 Clyde attended the Baptist church in Monroe and received Christ as his Savior at a revival meeting when he was 14 years old alongside his mother. He graduated from Monroe High School and attended Moody Bible School, where he completed the three-year program in two years by not taking vacations.

In 1932, Alma Doering, the founder of Unevangelized Tribes Mission (UTM) spoke in Clyde's church of the great need in Congo. Clyde felt a call to this mission field and left three days later with $30 given by the Monroe church along with their promise to support him. The UTM board accepted Clyde for service, but stipulated the need for French language study. He completed this at the Emmaus Bible School in Lausanne, Switzerland and a subsequent 19 months in Brussels, Belgium.

In 1935 Clyde boarded a freighter to Matadi, Belgian Congo. From there he traveled by train, then by river boat to Kikwit, and finally by truck to Shambungu, a mission station in the interior. There he joined Abram and Eunice Zook, Mennonites from Kansas, working among the Chokwe and Lunda tribes. Elisabeth Lemière, who had worked at Kafumba, arrived soon after in Shambungu. Clyde and Elisabeth married and continued to work in the Shambungu area, using the recent grammar, dictionary and Chokwe New Testament to learn the Chokwe language.

Much of Clyde's time in the southern part of Bandundu (formerly Kwilu) Province near the Angola border was spent traveling to outlying villages where French and Kituba were not spoken. He traveled on foot or by bicycle, sometimes crossing dangerous, crocodile-infested rivers and eating irregularly in order to evangelize. The area was reputed for witchcraft and poisoning.

In 1939 Clyde, Elisabeth and their first child returned to Belgium, then, on the outbreak of World War II,  to the United States. Because of the war they were not able to return to the Belgian Congo. Paul Duchesneau invited them to join an evangelical ministry in Lafayette, Louisiana where Clyde visited homes and also preached on occasion in their Bible House congregation.

Clyde was ordained as a Baptist pastor in Iowa in 1946 before returning to Belgian Congo with Elisabeth and their three children. They again worked among the Chokwe and Lunda tribes, this time at Kajiji where the Shambungu station had been moved during their absence. In July 1947, their house with all the belongings and provisions they had brought for the next few years were burned while the family was away. These were difficult years as UTM moved toward dissolution in 1952. Clyde and Elisabeth continued to work with a shortage of funds and personnel and without a furlough until 1953 when they returned to Iowa. Before leaving they transferred the mission to the Mennonite Brethren board.

In 1955 Clyde and Elisabeth returned to Kajiji to work with several other Mennonite Brethren missionaries. Clyde continued evangelism in the villages along with his ministry on the mission station. In 1960 after Belgian Congo's independence and acts of violence against other mission stations, the Shannons, along with other missionaries in the southern part of the province, evacuated across the border into Angola. Subsequently they were flown to the United States.

In 1962, when it became clear that they would not be not able to return to the Congo (called Zaire and then the Democratic Republic of Congo), Clyde and Elisabeth were accepted as missionaries in Quebec with the Mennonite Brethren. They worked with Ernest Dyck in French in Ste-Thérèse and St-Jérôme, where Clyde visited homes and the hospital, distributed literature, read and explained the Bible in the homes of those who invited him, and began a Wednesday evening prayer meeting and Bible study. The considerable response led the Shannons to establish a new congregation, holding a Sunday afternoon meeting in Ste-Thérèse.

In 1963 Clyde and Elisabeth Shannon joined the Mennonite Mission to work in Joliette. Clyde as pastor continued his ministry of personal evangelism, literature distribution and Bible studies in homes. The early years were very difficult as the Roman Catholic clergy controlled the welfare system, the hospital and the schools. They warned the people about the man who distributed harmful literature and sold New Testaments for 50 cents. But Clyde persevered and people finally started to come to conversion and baptism. The Église Évangelique de Joliette was formally organized in 1974. Clyde was the second longest serving Mennonite Church pastor in Quebec-- 15 years until his 1978 retirement. Clyde continued to be active, visiting homes and hospitals and distributing Christian literature in Joliette. He did the same after 1993 as long as he was able to while living in the Fairview Retirement Apartments in Cambridge, Ontario.

Clyde's consuming passion was to share the gospel with others and to win souls to Jesus Christ.