From GAMEO
Revision as of 10:37, 24 May 2017 by SamSteiner (talk | contribs) (→‎Bibliography: added additional information)
(diff) ← Older revision | Latest revision (diff) | Newer revision → (diff)
Jump to navigation Jump to search
A checked version of this page, approved on 24 May 2017, was based on this revision. 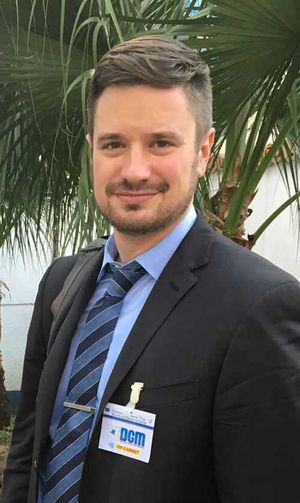 Michael Jesse "M. J." Sharp: Mennonite Central Committee volunteer and United Nations contract employee, was born 29 October 1982 in Elkhart, Indiana, USA to John E. Sharp (15 July 1951- ) and Michele Lynn Miller Sharp (27 March 1954- ). Michael was the middle child in a family of two daughters and one son. Michael was kidnapped 12 March 2017, together with five other persons as part of a United Nations (UN) investigation into armed conflict in the Democratic Republic of Congo (DRC). On 28 March 2017 his body, along with the body of UN colleague, Zaida Catalán of Sweden, was found in a shallow grave outside the city of Kananga in the DRC's Kasaï-Central province.

Michael Sharp was raised in the home of a pastor and historian, and grew up in Mennonite centers like Harleysville, Pennsylvania, Scottdale, Pennsylvania, Middlebury, Indiana and Goshen Indiana--locations where his father pastored and then served as Director of the Archives of the Mennonite Church-Goshen. His mother was a physician assistant. M. J. graduated from Bethany Christian Schools in Goshen, Indiana in 2001. He went on to Eastern Mennonite University (EMU) where in 2005 he earned a BA in history, with a minor in German. He later earned a MA in Peace Studies and Conflict Resolution at Philipps-Universität Marburg in Germany.

After graduating from EMU, Sharp worked for three years with the Military Counseling Network in Germany, a project of the Deutsches Mennonitisches Friedenskomitee to serve U.S. soldiers based in Europe who sought discharge from military service for conscientious objection or other reasons. From August 2006 to early fall 2008 he was coordinator of the project.

From 2012 to 2015, Michael Sharp served as Eastern Congo Coordinator for Mennonite Central Committee. This included working with other agencies, such as the Peace and Reconciliation program of the Congolese Protestant Council of Churches, a program that sent people into the forest to persuade rebels to come home. It is reported that Michael's team pursuaded 1,600 rebel soldiers to return to their homes.

In 2015 M. J. began contract employment with the United Nations, serving as an Armed Groups Expert in the United Nations Group of Experts on the DRC. This group was appointed by the U.N.'s Security Council to investigate new violence in Kasaï-Central Province that began after government forces killed Kamwina Nsapu, a tribal chief and militia leader, who had resisted DRC President Jospeh Kabila. The UN Group of Experts on Congo, established in 2004, has consisted of six experts appointed by the UN secretary-general to monitor the Security Council's sanctions regime for Congo and to propose individuals and entities to be added to the sanctions list. The experts collect and analyze information about armed group activities, their networks, arms trafficking, and those responsible for serious human rights violations.

In March Sharp and his colleagues planned to document the militia's alleged use of child soldiers, to investigate massacres of unarmed civilians by government forces, and to seek dialogue with stakeholders such as militia leaders, religious figures and civil society groups to promote peaceful solutions. M. J. was the coordinator of this group.

At the time of his death, Michael Sharp's North American base was in Albuquerque, New Mexico as part of a semi-intentional community of persons who valued peace and cherished community known as the Plex. He moved there in October 2016.

An acquaintance from National Public Radio recalled that "Michael Sharp believed in the power of persuasion. The 34-year-old ... with a penchant for plaid shirts would walk, unarmed, deep into rebel-held territory in the Democratic Republic of Congo, sit in the shade of banana trees with rebels and exchange stories.... Of course, even Michael didn't believe that his strategy of 'getting to yes' under the banana trees could by itself resolve a 20-year conflict with complex international roots. But he believed that without those quiet conversations, the war would never end."