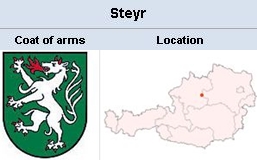 Steyr, a city in Upper Austria (Oberösterreich) (coordinates: 48° 2′ 0″ N, 14° 25′ 0″ E), famous as a center of the Austrian steel industry ever since the Middle Ages, with a wealthy and proud citizenship. Dur­ing the 14th and 15th centuries there existed in this city large and influential Waldensian congregations. Although no recorded ties between Waldensians and Anabaptists can be produced, connections are most probable. It is noteworthy, for instance, that an Anabaptist congregation existed in Steyr as early as 1526, of unknown origin, for when Balthasar Hubmaier passed through the city on his way from Zürich to Nikolsburg he found a small congregation shepherded by the chaplain of the "imperial castle," Johann Portner. Portner one year later (1527) introduced Hans Hut to the patricians of this city. Hut had arrived from Nikolsburg and Vienna on his big mission trip (ending in Augsburg in the same year), and immediately began an intensive activity among the well-established burghers of this city. Meetings were held in the house of the respect­ed patrician Veith Pfeffel; another patrician, Leonhard Khoberer, was converted. When Hut was on trial in Augsburg and questioned about his activi­ties, he claimed to have baptized 10 or 12 persons "in Eysenstadt" (Steyr) (Meyer, 226), but the num­ber of converts was certainly far greater than that figure. The city council became disturbed, impris­oned several persons without much ado, and report­ed the whole situation to Vienna. King Ferdinand I was shocked and decided to eradicate the evil. On 31 October 1527, the royal procurator Magister Wolfgang Künigl arrived in Steyr and began at once with examinations in an attempt to reverse the trend. Some men remained steadfast; others were willing to recant but were repelled by the brutality of the "Penance of Horb," the pre­scribed ritual of renouncing the Anabaptist faith and all the subsequent penalties connected with it. Even Künigl sensed that this formula was utterly disrepu­table and petitioned the king not to insist on it; he feared rebellion and foresaw that many would escape only to continue their "heresy" elsewhere.

The court passed the surprisingly mild sentence of several months' imprisonment, deeming this lenience necessary for new attempts at reconversion. Six men yielded not a whit, a few others expressed doubt concerning the deity of Christ, while the majority confessed the simple Apostolic Creed. The king overruled the mild sentence and asked for the names of the jurymen who had not voted for the death penalty. He ordered the execution of all who were obstinate; consequently six men were martyred during Lent and nine more in May 1528, a total of 15 executions. It was expected that this measure had broken the strength of the Steyr Ana­baptists.

But ten years later, in 1537-41, Anabaptists were again in Steyr, when the Hutterite chronicle reports the presence of "Philippites." Riedemann and other Hutterites visited them now and then, and a few men went to Moravia to discuss a possible merger. Among those mentioned was Wolf Brandhuber, apparently the son of the former leader of the Linz congregation. Whether or not community of goods was practiced remains undisclosed. Unfortunately these Philippites had no real leader, thus disorder set in and in 1541 the group broke up. Some went to the Hutterites in Moravia; the majority, however, turned either Cath­olic or Lutheran. The Chronicle, in its table of mar­tyrs of the year 1542, records for this city of Steyr a total of 30 martyrs, the greatest number in Upper Austria next to Linz.

For some thirty years after this the records are mute concerning Anabaptism. But then, all of a sudden, new troubles arose in this thoroughly Lu­theran city. Around 1570 the records mention "sub­versive" activities, even among members of the city council. The trouble is blamed on missioners from Moravia, though it cannot be proved. There is mention of secret meetings for adult baptism and the celebration of the Lord's Supper, but things remain somewhat obscure. Particularly embarrassing to the city fathers was the case of the two patrician fami­lies of Fäbl and Khoberer in 1575. Hans Fäbl, a goldsmith, refused to have his child baptized, and even abused the Lutheran preachers. In this he was supported by his friend Wolf Khoberer, son-in-law of an influential and wealthy council member. It is reasonable to assume that Anabaptist teachings prompted this attitude. The city council felt it neces­sary to put them into the Tower, primarily to avoid any impression that Lutheranism meant liberty of conscience. Soon, however, influential personalities intervened and the two men were released. Kho­berer made his peace with the city fathers, but the more stubborn Fäbl was eventually expelled from the city in 1580. It was the last record in Steyr of Anabaptist ideas or activities.