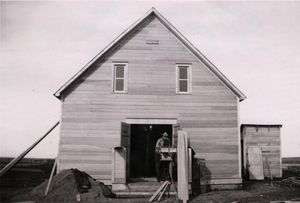 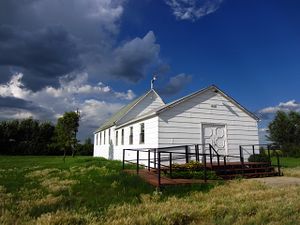 One hundred and thirty miles (210 km) west of Saskatoon, Saskatchewan, on a spur line of the Canadian Pacific Railway (CPR) that runs south west of Kerrobert, Saskatchewan lay the little hamlet of Superb. Here in 1927-1928, through the efforts of the Canadian Mennonite Board of Colonization, 10 Mennonite families, all immigrants from the Soviet Union, took up land on what was known as the “Exel” or “XL” farms. The first family arrived on 5 January 1927, Rev. Peter J. Klassen, his wife, and six children, (four children were born later). The second family arrived in November 1927, Mrs. Helena Janzen, her six children, and her mother, Mrs. Wiens. All of the other families arrived in March 1928. They were: Katherine and Jacob Wiebe, Sr. with seven children (plus one born later); Anna and Peter Epp with 2 children; Susanna and Kornelius Peters with five children (plus two born later); Rudolph Friesen; Sarah and Henry Epp with two children (plus six born later); Marie and Peter Heinrichs with 3 children; Mr. and Mrs. Peter Siemens; Annie Siemens; Susie Siemens; Henry Wiebe (Peter Siemens' hired help); Mr. and Mrs. Jacob Hooge with five children (plus one born later).

The group began Sunday worship services immediately, taking turns hosting the service in their homes. Twenty miles (32 km) north of Superb at Luseland, a few more Mennonite families took up land in 1928-29 under the Canadian Mennonite Board of Colonization. These families were: Rev. Peter A. and Helen Warkentin with 10 children; Mr. and Mrs. John Ewert with 4 children; Mr. and Mrs. Paul Poetker with 7 children; Maria and Peter Penner with 2 children; Grandmother Marie Lehn who lived with the Penners; David Unger who shared the farm with Peter Penner.

Peter A. Warkentin organized the Luseland group for worship. The two groups met as often as they could for joint worship as travel was difficult in those days. Travel eased as families were able to purchase vehicles, and the two groups banded together and built a church in 1944, which was dedicated in 1945. The cost to build was $1,906.87, not including all the volunteer labor. Since only an Elder could perform baptism and communion, early on the group joined the Ebenfeld church group (Gemeinde) with Elder Wiens at Herschel. The other churches in the Gemeinde were at Fiske, and Glidden. They had annual meetings and a picnic. The Gemeinde disbanded in 1972 and in 1973 the congregation at Superb officially became Superb Mennonite Church.

The transition from German to English was slow. One catalyst was marriages to English girls who not only did not know German but wanted to sit on the men’s side with their new husbands. In 1967, the minutes from the annual meeting were read in English for the first time. It 1972 the decision was made to purchase half of the Adult Sunday School lesson books in English.

In 1932, Rev. Peter J. Klassen organized a mixed choir consisting of ten voices, teaching them to sing in harmony according to numbers on the scale instead of notes (Ziffersystem). Music continued to be a highlight of the congregation. Eileen Klaassen began a men’s choir around 1978 which sang for a few decades. Since 2001 the mixed choir is known as “Simply Superb.” During Grant Martens’ ministry (2001-2006) the choir performed Wheatbelt Gospel, Joseph and the Technicolor Dreamcoat, Wheatbelt Parables, and Godspell in 2011.

The congregation held its last service on 31 May 2020.

Superb did not have its own cemetery and members were buried at their neighbouring village cemeteries of Major or Luseland.