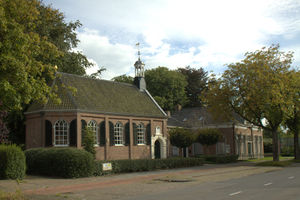 The old name of this town is Zuiderhuisterveen. From the origin until the end of the 18th century it was a peat colony. Its first inhabitants, who are said to have been Mennonites, came about 1600 or shortly after to dig the peat, which was shipped out as fuel. About 1700 a number of Mennonites from Oldehove and Niehove in the adjacent province of Groningen moved to Surhuisterveen, whose population then largely was Mennonite.

The first meetinghouse was evidently built at a very early time, for in 1685 it was dilapidated and was replaced by another; the present church with adjoining parsonage is the third; it was built in 1859, remodeled in 1877. Surhuisterveen was one of the last Dutch congregations to obtain an organ, singing having been led by precentors. An organ was installed in 1910 and dedicated on July 10 of that year. The congregation has a ladies' circle, a Sunday school for children, and a youth group. Blaupot ten Cate's statement that in 1711 some Amish Mennonite refugees from Switzerland (see Swiss Mennonites) settled at Surhuisterveen is an error.

At Westerveen in the neighborhood of Surhuisterveen a number of Tunkers (see Church of the Brethren) led by Alexander Mack, having moved from Schwarzenau, Germany, lived in 1720-1729; they then immigrated to Germantown, Pennsylvania, USA. They apparently had no contacts with the Mennonites of Surhuisterveen.