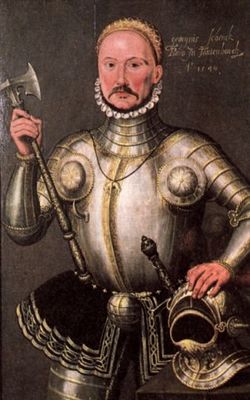 Georg Schenck von Tautenburg (Dutch, Georg Schenck van Toutenburg), died 2 February 1540, at Vollenhove, Netherlands, was a German nobleman, who was a stadholder of Emperor Charles V, governing the province of Friesland in 1524-40. Being a convinced Catholic, he fought Sacramentism and Anabaptism with all his power. He personally led the attack on the cloister of Bloemcamp (Oldeklooster) near Bolsward in March 1535, which had been taken by revolutionary Anabaptists some days before. During Schenck's government, besides those who had participated in the Oldeklooster uprising, all of whom were put to death, 19 Anabaptists were executed whose names are known; the number of anonymous Anabaptist martyrs in Friesland during his rule is estimated at about 80.

In 1534 Schenck, as a confidential agent of the emperor, negotiated with Franz von Waldeck, Bishop of Münster, Westphalia; the emperor wished to have the territory of the bishopric added to his dominion. Though the negotiations were strictly secret, something of the imperial plans became known and were opposed by the Protestant princes in Germany, particularly Philipp of Hesse. Schenck also seems to have dealt with Jan van Geelen the ambassador of Jan van Leyden, in order to acquire the city of Münster for the emperor.