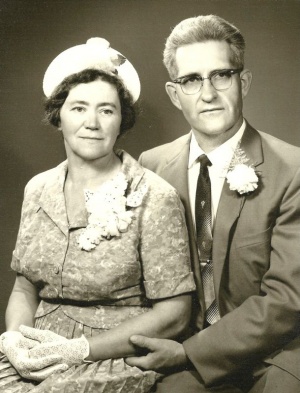 George migrated as a fifteen-year-old youth to Canada with the Abram Epp family in 1925, with plans for his mother and family to follow later on. In the end he was the only member of his family to leave Russia. His ambition was to farm and to serve the Lord by ministering, preaching and teaching. He attended Coaldale Bible School and Winkler Bible Institute for four years, graduating from Winkler in 1933. George was baptized on 3 August 1930 in the Coaldale Mennonite Brethren Church. After graduation he farmed in Alberta and taught for eight years at the Bethesda Bible School in Gem, Alberta. In 1942 George and his family moved to Namaka to help his father-in-law, Aron A. Toews, on the farm.

Upon his resignation from the ministry in East Chilliwack, George became pastor of the Vancouver Mennonite Brethren Church for eight years. In 1978 the Thielmanns moved to Asuncion, Paraguay for seven months to teach and preach in the various Mennonite colonies. They then retired to Chilliwack, where he shared the preaching and teaching duties in the German service in the Broadway Mennonite Brethren Church. They moved to Clearbrook in 1987 where George cared for Agnes who suffered from Alzheimer's disease. He preached occasionally in Clearbrook Mennonite Brethren Church. He remained physically active throughout much of his life and jogged and rode his bicycle well into retirement. Terminal cancer was diagnosed in January 1991 and he passed away within a few months.

George Thielmann was very active in the work of the Mennonite Central Committee. This commitment to relief most likely stemmed from the aid he himself received as a child in Russia, when his family almost starved to death in the winter of 1921. "In the Thielmann family, George, the middle child, was chosen to get a daily cup of cocoa or a bun. 'You had to eat it there; you couldn't take it home to share. That probably saved my life'" (Lescheid: 17-18). Thielmann soon became involved in the MCC in BC, serving for three years as vice-chairman before taking on the role of chairman from 1955 until 1971. George also served on the board of MCC Canada.

Thielmann was a tireless worker in the church and was known for his servant attitude, always putting others ahead of himself.