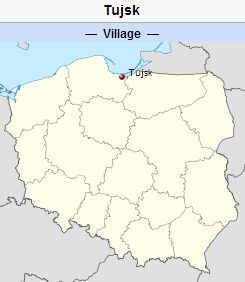 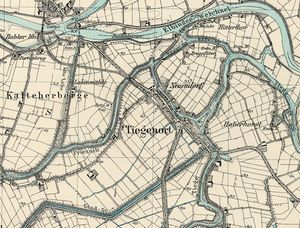 Tiegenort was established in 1349 by Heinrich Dusemer von Arfberg, Grand Master of the Teutonic Knights. The village was colonized in the 17th century. Until 1793 Tiegenort was part of Danzig in Royal Prussia (also known as Polish Prussia) in the Kingdom of Poland. The Second Partition of Poland in 1793 added Danzig and its surrounding territory to the province of West Prussia. Tiegenort was situated in the district (Kreis) of Marienburg from 1818 until the establishment of the Free City of Danzig in 1920. Tiegenort came under the control of Nazi Germany during World War II until February 1945 when it was occupied by Soviet forces and eventually returned to Poland. Today it is a village in the administrative district of Gmina Stegna, within Nowy Dwór Gdański County, Pomeranian Voivodeship.

In the 1793 Danzig census there were four Mennonite families in Tiegenhort with the following surnames: Borckmann, Loepp, and Penner. In 1820, Tiegenort/Freiheit had 315 residents, including 24 Mennonites. In 1885, the village was composed of 231 włókas (4,148 hectares), 43 houses, 334 Catholics and Lutherans, and 15 Mennonites.

Mennonites who were residents of Tiegenort were members of the Tiegenhagen Mennonite Church.