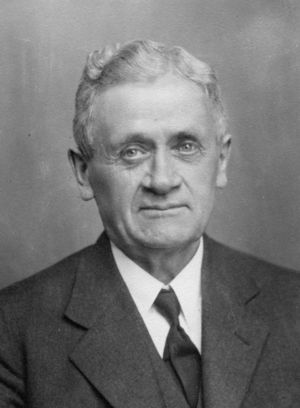 David Toews: known generally as Bishop Toews in Canadian government and railway circles but he was also an elder and leader in the General Conference Mennonite Church. David was born 9 February 1870 at Lysanderhöh near the Volga in Russia, one of the eight children of Jacob Toews (26 June 1838, Wotzlaff, Danzig, Prussia - 2 January 1922, Aberdeen, Idaho, USA), a minister, who had come to Russia in 1869, and Maria (Wiebe) Toews (16 June 1838, Neuendorf, Gross Werder, Prussia - 16 April 1924, Aberdeen, Idaho, USA). On 20 September 1900, David married Margaretha Friesen (24 July 1881, Laird, Saskatchewan, Canada - 11 July 1941). She was the daughter of Abraham Friesen (1849-1901) and Margaretha Regier (1859-1912); Margaretha was the daughter of Elder Peter Regier and sister of Elder Peter Regier of the Rosenort Mennonite Church, Saskatchewan). David and Margaretha were married 20 September 1900 in Tiefengrund, Saskatchewan, Canada. David and Margaret had nine children: Marie, Benno, Margaretha, Elsie, Dora, Louise, Elma, Anna, and Irene. On 25 February 1947, David Toews died, and was buried in the Rosthern cemetery.

When David was 10 years old he accompanied his parents on the ill-fated trek to Turkestan experiencing hardships so severe that he later hesitated to talk about them. After four years of disappointment in Turkestan, the Toews family immigrated to Newton, Kansas, where Jacob Toews served the Mennonite church as elder for about 30 years. David attended the public school to learn English, and the Zentralschule at Halstead in preparation to teach. He then taught school at Whitewater, Elbing, and Newton, Kansas. On 20 May 1888 his father baptized him at Newton.

H. H. Ewert, who had been the principal of the Halstead school while Toews attended it, persuaded Toews to accompany him to Gretna, Manitoba to teach there. Between 1895-1897 Toews attended school at Winnipeg. He taught for one year in the village of Burwalde near Winkler, and then went to Tiefengrund, Saskatchewan, where he worked at a homestead and taught school. On 18 August 1901, he was ordained as a minister. He had married Margaret in 1900.

In 1901-1904 Toews taught school at Eigenheim, Saskatchewan, and then at the German-English Academy at Rosthern, which he had helped to establish. He served as principal until 1917, and also as president of the school corporation, a position which he held until late in life. In 1913 he was ordained elder of the large Rosenort church. This position, together with the chairmanship of the Conference of Mennonites in Canada between 1914-1940, required a great deal of time and energy, particularly during World War I. For many years David Toews was a member of the Home Mission Board of the General Conference. In this capacity he was a real assistance particularly to the Mennonite immigrants who came to Canada after 1923.

As chairman of the Canadian Mennonite Board of Colonization 1922-1946, David Toews was keenly interested in the well-being of the Mennonites in Russia, who suffered great hardships during the revolution following World War I, and worked unstintingly to aid the Mennonite immigration to Canada. In 1923-1930 over 20,000 Mennonites were brought to Canada from Russia under the auspices of the Board.