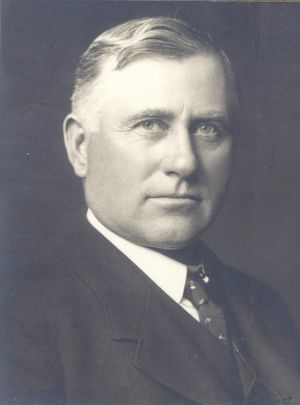 Bernhard attended the secondary school in Halbstadt and a business college in Odessa. His father was a miller and had made a trip to Siberia to investigate settlement possibilities there. When the Mennonites of Russia became restless around 1870 about the prospective loss of certain privileges, America became a favorite topic of conversation. Bernhard Warkentin, Philip Wiebe, Peter Dick, and Jacob Bähr, all young men with well-to-do parents, made a trip to America in 1872. In 1872 they arrived at Summerfield, Illinois, where Warkentin made his headquarters at the home of Christian Krehbiel. He was in constant touch with his friend David Goerz back in Russia. He traveled extensively, investigating Manitoba, Minnesota, the Dakota territory, Kansas, and Texas, always reporting his findings. Railroad agents contacted him as soon as it became known that a considerable number of Mennonites were considering coming to America. He settled in Halstead, Kansas, in 1873 with the Summerfield Mennonites under the leadership of Christian Krehbiel, after attending McKendrie College of Lebanon, Illinois, for one year.

In 1873 he built a gristmill at Halstead on the Little Arkansas River. Two years later, Bernhard and Wilhelmina were married, and his father came from Russia to attend the wedding. In 1878 the Halstead Mill and Elevator Company was organized, of which his father-in-law was principal stockholder and president. In 1885 Warkentin made a trip to Europe, particularly South Russia, and after his return moved to Newton in 1886 and established the Newton Milling and Elevator Company. In 1900 he established the Blackwell (Oklahoma) Milling and Elevator Company. The milling industry which he started with a daily capacity of 10 barrels grew to a capacity of 1700 barrels, the flour being sold throughout the United States and Europe.

Warkentin's greatest public service was probably the introduction of the hard winter wheat to Kansas. Hard winter wheat or red Turkey wheat had been sown by the Mennonites immediately after their arrival in Kansas. It was Warkentin, however, who experimented with the various varieties of wheat in co-operation with Mark A. Carleton, a representative of the U.S. Department of Agriculture. In 1885 Warkentin made arrangements in South Russia for a large shipment of hard winter wheat to Kansas for distribution among the farmers. He was assisted by his brother-in-law Johann Philipp Wiebe and his nephew Bernhard Enns. In 1900 the Kansas State Millers Association and the Kansas State Dealers Association asked Warkentin to arrange for a large-scale importation of seed wheat. About 15,000 bushels were imported as a result. Carleton went to the Ukraine in 1898 to study the red Turkey wheat in its native country and experimented with some 300 varieties of wheat near Halstead (see Wheat).

Warkentin organized the Halstead State Bank and the Kansas State Bank of Newton, of which he was director and president. He held numerous other public offices and was active in the founding of Bethel College, the Bethel Deaconess Hospital, and the Mennonite Mutual Fire Insurance Company at Newton.

Death came to Warkentin on 1 April 1908, in Beirut, Syria (now Beirut, Lebanon). While he and Mrs. Warkentin were traveling from Damascus to Beirut, a pistol accidentally discharged in the adjoining compartment, killing Warkentin.

Bernhard Warkentin's significance goes far beyond his instrumentality in bringing Mennonites to America. He was a pioneer of Kansas in helping to establish numerous institutions and businesses and making Kansas a "bread basket."