From GAMEO
Revision as of 19:04, 25 October 2018 by SamSteiner (talk | contribs)
(diff) ← Older revision | Latest revision (diff) | Newer revision → (diff)
Jump to navigation Jump to search
A checked version of this page, approved on 25 October 2018, was based on this revision. 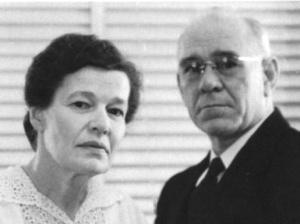 In 1899 the family moved to Ladekopp, Molotschna, where Jacob's father was a teacher. Then in 1910 they moved again to Neu-Halbstadt where Bernhard Wiens was appointed principal of a teachers' training college. It was in Neu-Halbstadt that Jacob received most of his initial formal education -- high school and five years of college. Two of Jacob's college years were in pre-medicine, which prepared him, following his conscription, for his work in the medical corps of the White army. It was at this time, especially as a result of the influence of his teacher of religious studies, Benjamin H. Unruh, that Jacob accepted Jesus Christ as his personal savior and was baptized on Pentecost in 1917 in Neu-Halbstadt. He remained a member of that congregation until he and his family fled the Ukraine in 1924.

When the Wiens family immigrated to Canada they settled in Vineland, Ontario. The Vineland (General Conference Mennonite) congregation nominated Jacob as their minister on 16 August 1925. Circumstances, however, made it necessary for the family to move to Waterloo, Ontario where Jacob H. Janzen ordained Jacob as associate pastor of the Waterloo-Kitchener United Mennonite Church on George Street. He served that congregation for twelve years.

In 1937 Jacob received a call from the Mission Board to be pastor and counselor of the newly formed First Mennonite Church in Vancouver, British Columbia. He and his wife also became house parents of the Mary Martha Girls' Home, a home for girls who were searching for work as domestic servants. This small congregation (originally eleven members) grew to over 450, notably as a result of emigration from Europe after World War II. In 1942, Jacob was nominated as bishop and his father-in-law, Jacob H. Janzen, presided over his ordination. Jacob served this congregation faithfully for 32 years until his retirement on 1 September 1969.

In addition to his responsibilities as pastor, Jacob was chairman of the Peace Committee for twenty years, and for many years was chairman of the Mission Committee and the BC Conference of Ministers. During World War II he acted as representative of the Church on behalf of many conscientious objectors. He also continued with theological studies throughout these years.

Jacob was a man of faith and conviction and as such projected a serious dedication to his calling. But he was also lighthearted and jovial, especially around his family. He loved their laughter and he loved humor, believing that his God is a happy God. His motto, throughout his ministry, was "No Other Truth." He remained steadfast in his faith and true to his motto until his death in 1975.