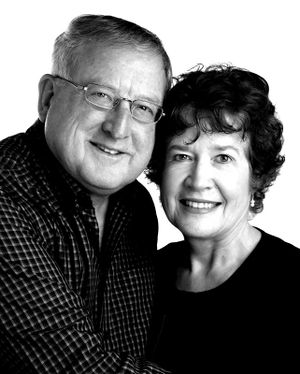 John accepted Christ as a young boy at summer camp. It was later at Bethany Bible Institute (BBI) that he made a wholehearted commitment to follow the Lord, was assured of his salvation, and was baptized. During his second year at the University of Saskatchewan, he decided to go into full-time Christian ministry. He had met Evelyn Thiessen at BBI and married her in 1968 during his first ministry at Lucky Lake Christian Fellowship Church in Lucky Lake, Saskatchewan.

In 1970, Wiens joined Campus Crusade for Christ (now Power to Change) and moved west to work at the University of British Columbia. This was a significant time of spiritual growth as Wiens was trained in evangelism and discipleship. In 1973, Wiens transferred to the University of Saskatchewan to start the campus ministry there. The couple was very involved at Nutana Mennonite Brethren Church and Wiens became Associate Pastor there in 1979. In 1982, John felt he needed more schooling so he moved the family to San Bernardino, California to attend the International School of Theology. After one year of school, the family moved to Yorkton, Saskatchewan to plant a church. In Yorkton, Wiens pastored Parkland Community Church for six years.

In 1989, Wiens was invited to join the staff at Willingdon Church (Burnaby, BC). He had a significant ministry there for 11.5 years. After Willingdon, Wiens pastored at Hyde Creek Community Church (Port Coquitlam, BC) as an interim pastor for five months and then became Associate Pastor at Gracepoint Community Church (Surrey, BC).

At age 62, Wiens felt a strong call from the Lord to become a missionary in Ukraine. The couple moved to Zaporizhia, Ukraine in 2007. While in Ukraine, Wiens was involved in starting New Hope Church and New Hope Center. Together with local co-workers, the couple started the first private trade school for graduated orphans in Ukraine.

Wiens was passionate about following Jesus and helping others find freedom in Christ. He also enjoyed playing golf and Rook, especially with his brothers-in-law. He never lost his love for farming and looked forward to any opportunity to help with the harvest in Beechy. Wiens also enjoyed cycling and, in an effort to raise money for Columbia Bible College and Bethany College, he rode across Canada with his son, Kenton, in two stages: Victoria to Winnipeg in 2004 and Winnipeg to Newfoundland in 2007.

In June 2013, just before returning to Canada to fundraise and report on their ministry in Ukraine, Wiens began to experience health problems. In November he was diagnosed with cancer and in January 2014 he passed away.