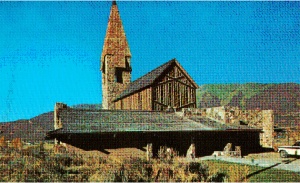 Mennonites originally moved to the Rocky Mountain resort community of Aspen, Colorado, after the Mennonite Board of Missions and Charities (Mennonite Church) contracted to operate the Pitkin County Hospital (later renamed the Aspen Valley Hospital) beginning 1 January 1960. Envisioning opportunities for community outreach the small congregation opened the Aspen Hospitality Center in the Aspen Grove Court Building on East Cooper Avenue--designed as a place for persons to congregate and dialogue--which was dedicated on 10 June 1962, the same day as the dedication of a new 25-bed hospital.  David Alderfer was licensed to serve as director of the Hospitality Center and to serve as chaplain at the hospital. With aid provided by the Mennonite Board of Missions and Charities, the Aspen Mennonite Fellowship organized on 17 May 1964 with 12 charter members.

Because of decreased foot traffic in that part of Aspen the Hospitality Center closed on 31 March 1966. The members of the Fellowship then worshipped with a local Baptist group on Sunday mornings and met in members' homes on Wednesday evenings.

Paul H. Martin moved from La Junta to Aspen on 1 January 1967, to serve as pastor of the Aspen Mennonite Fellowship and hospital chaplain. In 1967 a new meeting facility was developed in half of the two-car garage of the parsonage at Fifth and Hallam Streets. Edward Miller, pastor of Glennon Heights Mennonite Church, Lakewood, Colorado, assisted by his son Eric, conducted most of the construction work.

While the Fellowship struggled, E. M. Yost developed a vision for Aspen that was inspired by his visit to the Mill of Peace in France after attending the Mennonite World Conference in Karlsruhe, Germany, in 1957. Because the mountain town was becoming a major resort, he envisioned construction of a "Wayside Chapel" in a conspicuous location to serve both tourists and locals as a place for private meditation as well as intellectual and spiritual discussions relating to theology and ethics. The chapel would be used for nondenominational services, retreats, exhibits of religious art and literature, and dramatic and musical presentations. Land for the chapel was donated by Meadowood, Inc. and the estate of Leonard Thomas in 1965. An ecumenical Aspen Chapel Development Board under Yost's leadership was established on 2 September 1967, with the Rocky Mountain Mennonite Conference holding title to the property. The chapel, named "The Chapel of the Prince of Peace," was built at the scenic junction of Maroon and Castle Creek roads west of Aspen on State Highway 82 with major funding provided by Lyle Yost, E. M. Yost's nephew who owned the Hesston Corporation in Hesston, Kansas. Groundbreaking ceremonies for the chapel were held on 8 June 1968, and the completed structure, designed by the local architectural firm of Heneghan and Gale with Ron Birkey as consultant, was conducted the following year. From June through September 1969 some 5,000 people visited or attended concerts, events, and Sunday evening vesper services led by Martin at the chapel. Later, on 26 May 1974, the bell in the 110-foot tower was dedicated in honor of E. M. Yost.

The Aspen Mennonite Fellowship opened a Coffee House Church on 20 June 1971, in the upper story of a downtown pastry shop. In early 1972 a Voluntary Service unit, which became known as the Hallam Street Band, was formed to conduct the Coffee House ministry. However, the Aspen Mennonite Fellowship was discontinued that same year because Mennonites were no longer operating the hospital and church service attendance had dwindled. The Hallam Street Band continued to use the parsonage for ministry until 1974 when the Rocky Mountain Mennonite Conference delegate body decided to sell the property. The property was sold in February 1980--the Mennonite Board of Missions received $25,000 of the $235,000 selling price to cover its initial investment, while the majority of the funds were used to establish a trust fund known as the Rocky Mountain Mennonite Foundation. Earnings from the trust fund were to be distributed to the conference for purposes "consistent with the processes of the Rocky Mountain Mennonite Conference."

Unrau, Harlan D. In Pursuit of Land, Health and Mission: A History of Mennonites in the Mountain States Region. Printed in Canada by Blitzprint Inc.,  2007.