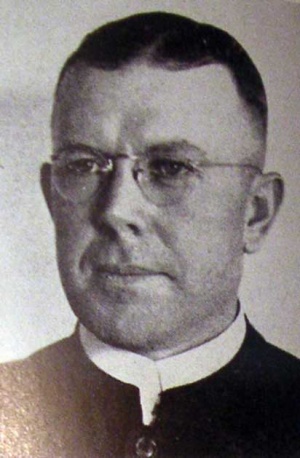 E. M. Yost's grandfather, likely also named Peter, was from Perth County, Ontario, where he and his wife had been converted in the 1860s by John Holdeman and become members of the Church of God in Christ, Mennonite. They moved to Reed City, Michigan in 1868 and helped to form a congregation there. Peter Yost, Jr., moved with his family to Plymouth, Nebraska in 1878. The family moved to a farm near Hesston, Kansas when E. M. was nine years old because his parents wished to be closer to a Church of God in Christ, Mennonite community. E. M.'s formal schooling included two grades in a rural school in Nebraska, five grades in Hesston, one year of agricultural study at the Kansas State College of Agriculture and Engineering at Manhattan (now Kansas State University), and a "Winter Bible School Term" at Hesston College.

About 1920 E. M. became Sunday School Superintendent at the Meridian (Holdeman) congregation in Hesston. On 5 March 1922 E. M. Yost, only age 19, was ordained as a minister at Meridian, five months before his marriage. After their marriage, E. M. and Emma began farming. He served in the Meridian congregation until 1926 or 1927 when they moved further west to Greensburg, Kansas where E. M. became the resident pastor for the small Bethel congregation. Soon after 1928 Yost found himself in tension with some of the doctrines and traditions of the Holdeman Church. He wanted greater freedom to enhance his preaching with study and preparation in contrast to the Holdemans' spontaneous Spirit-led sermon approach. He also questioned the theological position that the Church of God in Christ Mennonite was the only true church. Because of his concerns, he was asked to stop preaching within that denomination.

However, E. M. Yost still felt a call to preach, and attended a Ministers' Meeting of the Mennonite Church in Goshen, Indiana. After consultation, the leadership of the Missouri-Kansas Mennonite Conference decided to hold revival meetings in the Greensburg area, even though there were no Mennonite Church congregations there. There was a small, dying General Conference congregation and a more robust Krimmer Mennonite Brethren church, along with the Holdeman congregation.  C. F. Derstine, a Mennonite bishop from Ontario and a popular evangelist, led the three-week series of meetings in April 1932 during which E. M. and Emma were received into the Mennonite Church. As a result of the meetings a new congregation in Greensburg was formed in October 1932 with Yost as pastor. By the end of 1933 the congregation had 40 members. E. M. had a vision for a Mennonite-run hospital in Greensburg, but this did not come to fruition until after he had left the community.

On 24 April 1943, Yost was ordained as a bishop in the Missouri-Kansas Mennonite Conference. In April 1945 E. M. and Emma Yost and family moved to Denver, Colorado where E. M. became pastor of the Mennonite Church of Denver. Their move to Denver was partially motivated by Emma's increasing health problems; she had developed "Dust Pneumonia" from the dry, dusty conditions of Western Kansas. During his service in Denver, E. M. Yost became a "founder" and and an overseer in the Rocky Mountain Mennonite Conference from 1961-1968; he had been an overseer in the Missouri-Kansas conference since 1956. A large man, E. M. Yost is remembered as a commanding figure that stood above the crowd in stature and spoke in a deep bass voice. A lifelong concern for Christian service, ecumenism, and peace education developed for Yost into a passionate dream to establish "A peace chapel at one of the crossroads of the world." That dream became a reality when the Prince of Peace Chapel at Aspen, Colorado, was dedicated in 1969. E. M. is buried in the Crown Hill Cemetery in Denver.