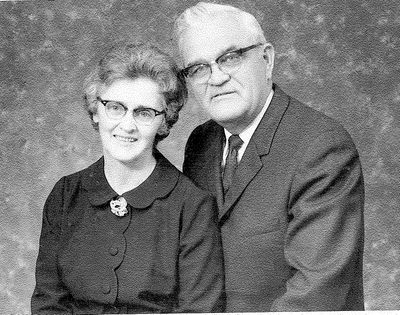 John was baptized in 1931 and joined the Mennonite Brethren Church at Arnaud, Manitoba. He attended Winkler Bible School for three years, graduating in 1935. From 1936-1944 he was a teacher and the principal of the newly opened Steinbach Bible School. In the summer months, John and Martha worked on his mother's farm at Dominion City, and in the winter months they lived in Steinbach where he taught at the Bible School. Martha, who trained as a nurse in St. Boniface, Manitoba, worked as a nurse in the Steinbach Hospital for two years. John was ordained as a minister in Arnaud in 1937.

In 1944 John and Martha Baerg with one child, moved to Hillsboro, Kansas. While a student at Tabor College and "House Father" of the Hillsboro Mission Home, Baerg was called to be pastor of the Ebenfeld Mennonite Brethren Church, rural Hillsboro, Kansas, October 1945, where he served until 1950. He graduated from Tabor College in 1946 with a B.Th and a B.A. in Psychology.

John was the first salaried pastor at Ebenfeld MB, and also at Virgil MB, initiating professional ministry in the church. In this sense he was a significant transitional leader, navigating the change from "lay" ministry to "paid" ministry, in at least two congregations.

John is remembered for his preaching, teaching, leading Bible Studies and being a spiritual mentor to many. In 1971 friends from the Virgil church and Orchard Park Bible Church made it possible for John and Martha to make a trip to England, Zaire, Israel and Europe. Visiting his brother, missionary Willie Baerg in Zaire was a highlight. In 1975 they spent six weeks in South America (Brazil and Paraguay), where John preached 19 times in 21 days.

Above all, John had a strong sense of God's calling for his life, and he became an example of being a faithful follower to that call.