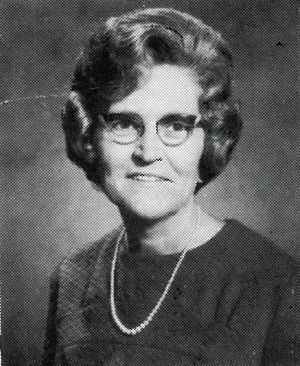 Annie E. Dyck Buhler.
Missionary Album of Missionaries Serving Under the Board of Foreign Missions, The Mennonite Brethren Conference, Inc., 1954.

As a child, Annie lived with her parents and seven siblings near the town of Winkler, Manitoba, where the family owned land. She attended school in Winkler, completing her elementary and secondary education there. For several years, she also took music lessons, which she later put to use in her work in South America.

Annie became a Christian at a young age and was baptized on 2 August 1935 in a pond near Winkler. Soon, she began to consider getting into mission work after hearing a report from people who had been working in Colombia, South America. In the meantime, she began to help the church in various ways, distributing religious tracts for an evangelistic mission, teaching Sunday school and summer Bible school, and singing at hospitals.

In 1944, Dyck applied for service with Mennonite Brethren Mission and was accepted to go to South America. On 25 March 1945, she was ordained in Winkler for missionary service before going to Hillsboro, Kansas, USA for further studies. She left for Colombia via the United States at the end of January 1946 and spent some time in language study in Medillin before leaving at the beginning of October for her assignment in the Choco, a rainforest on the west coast of Colombia.

For much of the next 40 years, Annie worked in teaching, literature distribution, and Bible study. She worked in both Colombia and Panama, with a short time of working in the United States and some teaching in Mexico. She taught the Spanish language to other workers, as well as music, history, and other subjects to students of various ages. In addition, she helped with church services, where she used her musical talents.

Dyck completed several terms of service in South America before she moved back to Manitoba in 1968 to study. She graduated from the University of Manitoba with a Bachelor of Arts in 1970 and then taught in British Columbia and Manitoba before leaving for Panama in 1972. She worked with New Tribes Mission in Panama City as a teacher of mathematics and other subjects, but she soon returned to Colombia to teach in Cali, the Choco, and Medillin. She left for her final term in 1980. On 31 July 1982, she married a widower, Samuel E. Buhler, from Saskatoon, Saskatchewan. After their wedding in Winnipeg, they made their home in Saskatchewan.

For the next few years, Annie Dyck Buhler and her husband visited family, volunteered in the church, and spent their time helping in a variety of capacities. In 1998, Sam began to experience health problems that eventually made it necessary for him to move to a care home. He died on 9 August 2001 in Dalmeny, Saskatchewan. Annie also became ill, and she died of cancer in Saskatoon on 16 March 2007.

Anna "Annie" Dyck Buhler was a dedicated mission worker who spent her career in helping the people of Colombia, Panama, Mexico, and the United States. Through her versatility and commitment to her work, she was an example for others to follow.