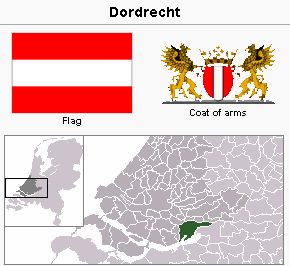 Dordrecht is a city in the Dutch province of South Holland (coordinates: 51° 48′ 36″ N, 4° 40′ 12″ E). In the 16th century there was a large Mennonite congregation here. Early Anabaptism had no great number of adherents here, although Bartholomeus Boeckbinder and Willem de Cuyper preached here as early as 1533-1534. Of great blessing was the activity of Elder Leenaert Bouwens, who baptized six persons here in 1557-1561 and no less than 44 in 1563-1565. About this time the congregation was greatly increased by immigrants from Flanders, as is indicated by the family names. Yet the congregation was severely persecuted. The Martyrs' Mirror names as martyrs here: Digna Pieters, 1555; Joris Wippe, burgomaster of Meenen, Belgium, 1558; ten persons in 1569; Jan Woutersz van Cuyck, an artist, 1572. When Calvinism prevailed, the Synod of Dordrecht in 1574 passed a sharp resolution against the Mennonites.

Among the important Mennonites of Dordrecht were the historiographer Matthijs van Balen, painter Dirk van Hoogstraten and his son the painter and poet Samuel van Hoogstraten, and the artistic Houbraken family. The congregation once had many well-to-do members. In 1655 it made a donation of 300 florins for the victims of persecution in Savoy. Of the elders the following are known: Gerrit van Bylaer (d. 12 October 1617), Hendrik Terwe (d. 2 October 1625), Mees Ghijsbrechts (d. 19 June 1648), Bartholomeus van Stein, and Tieleman Jansz van Braght (d. 8 October 1664); in the 18th century, Bartholomeus de Groot and Abraham Verduin. One of their preachers was a Menno Simons, who resigned on 19 January 1653. A statement in the Doopsgezinde Bijdragen (1862, p. 104) seems to indicate that the elders Cornelis van Braght and Abraham Ferrier were appointed to that office by the government in 1689 and 1691 respectively. The last preacher was Adam van Moerbeek, 1749-1793. After that the Rotterdam preachers occasionally served the Dordrecht congregation.

In the 17th century the church, which belonged to the Flemish branch, was at its zenith. It was here that the Dordrecht Confession of 1632 was drawn up by Adriaen Cornelisz. Van Braght, the noted author of the Martyrs' Mirror, and Bastiaan van Weenigem of Rotterdam were the leaders of the conservative wing in opposition to the liberal views of Galenus Abrahamsz de Haan, and the principal authors of the Zonist Verbond van Eenigheid.

In 1624 the congregation built a church on Lange Breedstraat, and in 1643 enlarged it. The Calvinists in 1664 persuaded the authorities to forbid the building of a little gate to the church. On 17 September 1683 the Mennonites asked the city authorities for a new church location, apparently in vain.

During the 18th century the congregation decreased steadily. In 1732 there were 80 members left, in 1742, 40. After 1793 they had no pastor, and their church was used for other purposes, such as meetings of the Dutch Missionary Association. About 1840 a certain Karsdorp exploited this state of affairs; he prevented any Mennonites who moved into the city from joining the church; and when he alone was left he sold the church and had the government grant him the capital. For ten years the Rotterdam Church was involved in litigation to secure these funds, but lost. The lower chamber passed a resolution acknowledging that the government director was in error in giving Karsdorp the funds, but could not make it retroactive.

When the membership had again increased to 60 in 1895, the congregation was reorganized (13 December 1895). A church council was chosen. Johannes Dyserinck, a minister in Rotterdam, was consilient and gave religious instruction. On 12 January 1896 the first sermon was delivered to the new congregation. In 1897 they built a church on Lenghenstraat, and dedicated it on 9 January 1897, with a sermon by Dyserinck. On 15 October 1899 they called a preacher of their own and the government, to atone for the error made earlier, gave him an annual subsidy of 200 florins. For preaching services they were united with Breda from 1899 to 1945. The ministers were A. J. van Loghum Slaterus, 1899-1908; W. Koekebakker, 1908-1945; Abraham Mulder after 1946. The membership in 1898 was 74; in 1926, 180; in 1953, 148. At that time the congregation had a Sunday school, Bible courses, women's circle, and many youth activities.