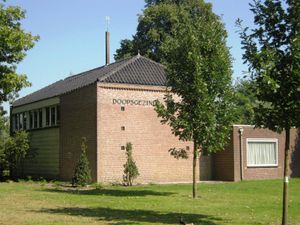 Breda, a town in the predominantly Catholic Dutch province of North Brabant (pop. 85,294 in 1947; 86 per cent Catholic; 200,000 in 2008), the seat of a Mennonite congregation. At the time of the Reformation there were many Anabaptists in Breda. No fewer than seven martyrs suffered death here in 1572 for their faith. One of their members was Cornelis de Gyselaar, who married the widow of the martyred Valerius, called the Schoolmaster. The Martyrs' Mirror describes at length the cruel tortures Cornelis Geleyn, another of the members, endured. In August 1572 several members were seized in the neighboring village of Nieuwvaart or Klundert at a well-attended religious service, which was betrayed to the magistrate. About 100 persons had assembled in the house of the martyrs Peter de Guliker and Jan Pieters, when they were surprised and seven of them taken. They had imagined themselves so secure here that Menno's friend, the elder Hans Busschaert, had sent his son there. (Doopsgezinde Bijdragen 1912 gives a letter written by the martyr Adriaen Jacob).

In the 17th century there was a congregation in Breda, which had several members living in Gertruidenberg and in Oosterhout. In 1664 they joined the Zonists and had as their preachers Jan Jans van de Langerijt and Augustijn Gerrits Hulstmann. The congregation presumably died out soon afterward. At any rate it no longer existed in 1731.

The Breda congregation was re-established on 22 November 1896 by a number of Mennonite families living in the town. At the beginning B. Haga, the preacher of the Nijmegen congregation, came over to serve them once a month with preaching and catechetical instruction. In 1899 (the membership at that time was 72) the Breda congregation united with that at Dordrecht for ministerial service and instruction. This union lasted until 1945. In 1947 a similar combination was made with Eindhoven. The membership in 1953 stood at 96. The congregation did not own a meetinghouse. After 1896 religious services were held in the Lutheran church.

The Breda congregation in 1953 had a woman's organization and Bible courses were held regularly. It belonged to the Zuidholland-Zeeuwsche Ring.

Braght, Thieleman J. van. The Bloody Theatre or Martyrs' Mirror of the Defenseless Christians Who Baptized Only upon Confession of Faith and Who Suffered and Died for the Testimony of Jesus Their Saviour . . . to the Year A.D. 1660. Scottdale, PA: Herald Press, 1951: 930. Available online at: http://www.homecomers.org/mirror/index.htm.