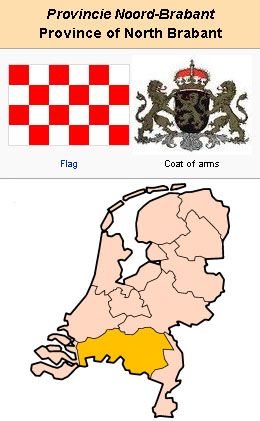 North Brabant (Dutch, Noord-Brabant) is a Dutch province south of the Maas. Its population in 1947 was 1,180,133, and in 1994, 2,259,800. There was a slight Anabaptist-Mennonite activity in this province during the 16th century. Anabaptists there were found at 's Hertogenbosch, Breda, Vught, and a few other places, but only in small numbers. In 1571 a small Mennonite congregation at Klundert in the western part of this province was exterminated by persecution. In the 17th century a Mennonite congregation existed, called "Brabandt, Bredaen Oosterhout, united with Geertruydenberg." This congregation, belonging to the Flemish branch and regularly supported by the Flemish congregation of Rotterdam, died out shortly after 1670.