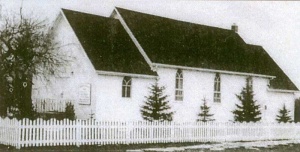 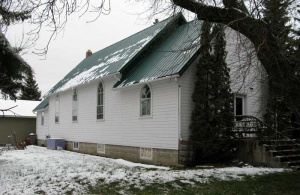 In the fall of 1924 Mennonites emigrating from Ukraine, mostly from the Chortitza area, began settling in the Dundurn district about 40 km south of Saskatoon. With the help of the Mennonite Board of Colonization they settled on already established large farms named after the early non-Mennonite settlers: farms with names like: Schwager, Meilicke, Gudurian, Litzow and Petersen. Initially they farmed the land cooperatively but gradually it was subdivided among the settlers. These immigrant Mennonites became known as Rußländer to distinguish them from the Kanadier Mennonites who settled nearby on the Canadian prairies before World War I. Though they had been assisted by Kanadier Mennonites, the Rußländer decided to form their own church called the Nordheimer Gemeinde (which literally translates as: Northern Home Community or Nordheim Mennonite Church Group). This was a multi-church congregation which met at Pleasant Point, Hanley, Elbow, Milden, Harris, Dundurn and also in some small preaching stations. In this way members of the Nordheimer Gemeinde could preserve their church practices and traditions utilized in the Mennonite church organizations in Russia. These new immigrants came with their own pastors. One pastor, Johann J. Klassen of Hanley, organized the scattered immigrants into the Nordheim Church which was the first Rußländer church in Saskatchewan.

At first the Dundurn settlers on Schweger Farm no.1 worshiped in the large residence on the farm with Abram H. Kroeger Sr. of Hanley conducting services. In 1925 ten more immigrant families bought and settled the nearby Meilicke farm. These these settlers initially worshiped in a home in the village of Dundurn, assisted occasionally by pastors Abram H. Kroeger and Isaac Epp of Pleasant Point.

In 1925 Elder David Toews ordained Johann J. Klassen as founding Elder of the Nordheim Church. In Fall 1926 the congregation in Dundurn rented a church building in town from the Seventh Day Adventists who had in 1915 purchased the building from the Methodists who build it in 1906. They paid one dollar per Sunday. By 1929 the two groups on the Schweger and Meilicke groups had joined and the congregation, and purchased the building at the corner of Barton St. and 2nd Ave. for $950.00. The price included the organ. Elder Klassen moved to Dundurn from Hanley and in 1939 the group that settled on the Peterson farm across the south end of the Blackstrap also joined the Dundurn church. In 1958 the congregation extensively renovated the building and in 1974-75 they added an extension to provide a minister’s study and other modernization services. Services were conducted completely in German up to the 1970s; in the 1980s occasional services were in German.

In 1976 the Nordheim Mennonite Church Group dissolved and Dundurn along with the other two remaining congregations, Hanley and Pleasant Point, became independent congregations. After a decade of service pastor Henry Sawatzky retired in 1999. There was no one to formally serve as pastor though pastors from neighboring congregations occasionally served the Dundurn congregation. With membership declining to about 15, the congregations held its last service on 20 June 2003.  Most of the remaining members joined First Mennonite Church in Saskatoon and a couple joined Pleasant Point. Rather than let the building decay it was sold to a trucking company to be used for offices.

The congregation used the local Hillside Gardens Cemetery, just north of the town for burials.