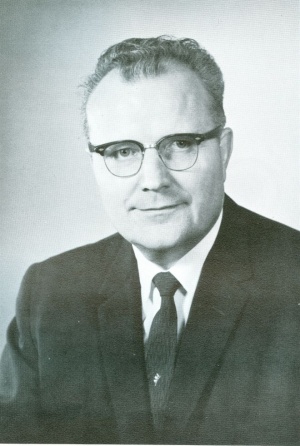 Jake spent five years (1916-1921) in China, where his parents served one term as missionaries under the China Mennonite Mission Society (CMMS). During those years in China he received a strong desire to return to China as a missionary. Later, to prepare for this envisioned work, he attended both Prairie and Bethany Bible Institute.

Upon graduation in 1936 he applied to the CMMS and was accepted for a Bible School training ministry. Failure to get support during the Depression led him to accept a teaching position at Bethany. During the summer months he served as Field Director for Western Children's Mission (WCM), an outgrowth of the Bethany Prayer League. During this time he met Alvena Krueger and they were married in 1939.

In 1941, with daughter Carol, the first of five girls the Lord would give them, the Epps left Bethany to head for China. While they awaited passage in Vancouver, the Japanese attack on Pearl Harbour closed that door. The Lord opened another door - a three-year teaching ministry in the Elim Bible School, and then a return to Bethany in 1944 for another twenty years of teaching, nineteen as principal, a position he accepted "temporarily." For the first 10 years Epp again served in leadership roles for the WCM.

In addition to his valued work in the classroom and as an administrator who strove for consensus in decision making, Epp was known as the "Jake-of-all trades." Humbly and sacrificially he did whatever needed to be done. Unable to minister in China, the Epps found it a continual joy to help shape young people for God and to see them enter full-time Christian ministries at home and abroad.

After Bethany, the Epps served 15 years with the Mennonite Brethren Board of Missions and Services, 11 as Secretary for Asia, Africa, and Europe and four teaching in Linz, Austria. Then followed various interim pastoral positions, including West Portal Mennonite Brethren Church in Saskatoon, the place the Epps had chosen for retirement.

From 1984 to 1987 Epp served as Dean of Students at the Graduate School of in Korntal, Germany, under direction of G. W. Peters. Then followed another interim pastorate in Lustre, Montana. In 1988 he bought a residence in the West Portal Manor and continued teaching and preaching. He died after a short bout with pancreatic cancer, during which he ministered through his pain to those who attended him.