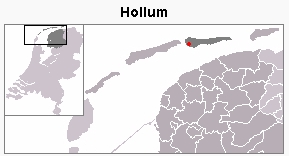 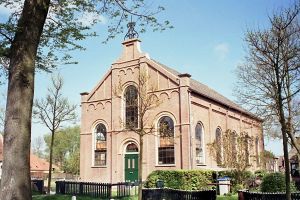 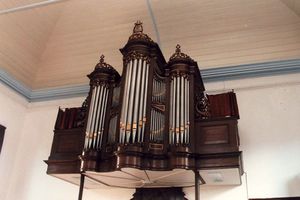 Hollum, a village on the Dutch island of Ameland (coordinates: 53° 26′ 20″ N, 5° 38′ 20″ E) in the province of Friesland, is the seat of the largest of the three Mennonite congregations (Hollum, Ballum, and Nes) on the island. Leenaert Bouwens visited Ameland a number of times on his journeys in 1551-1582 and baptized at Hollum and Ballum a total of 99 persons; hence it is likely that there was a congregation here in those early days. The several congregations on the island are due to divisions in the 16th century; there were two at Hollum: the "Blue Barn" or Waterlander, and the "Jan Jacobsgezinden" or Old Flemish.

Both congregations were served until into the 19th century by unsalaried preachers. In the Waterlander congregation, which was much the smaller and had been receiving support from Amsterdam since 1709, the first known preacher was Douwe Abes Tichelaer, 1709-1746, and the last preacher was J. H. Costers (retired in 1854). The Jan Jacobsgezinden group was very strict regarding the ban and avoidance; the government finally intervened and in 1608 passed such severe regulations that the congregation spoke of being persecuted. Their first elders (1650) were Jacob Janssen and Cornelis Jannsen, who were permitted to conduct baptism and communion; they were assisted by two trial preachers (proefdienaars), from whose ranks the succeeding elders were chosen. Noted elders were Jacob Jobs 1769-1804, and Cornelis Sorgdrager 1793-1826, the latter of whom was the first to give religious instruction to the children.

In the middle of the 19th century a desire to have a trained minister became evident here; the two elders were aged, and none of the members was willing to be chosen to the office. The Algemene Doopsgezinde Sociëteit at Amsterdam sent proponents to help them in 1850-1852; then the congregation called K. S. Gorter as its minister, who served 1862-1895. In 1854, when J. H. Costers of the Waterlander congregation retired, all the Mennonites on Ameland were united for a time in a single congregation, which at this time numbered 175 members. In 1870 the congregation divided into three separate congregations, served by two preachers, one serving at Nes and one at Hollum and Ballum. Gorter was followed by the preachers A. Stiel 1898-1905, J. M. Erkelens 1906-1908, J. Loosjes 1909-1914, J. E. van Brakel 1914-1928, W. Schopenhauer 1928-1932, W. Broer 1933-1941, H. D. Woelinga from 1947 on. Since 1933 there had been only one minister on the island; he lived at Hollum and served the three congregations. In 1857, 16 members left the church to join the followers of the pietistic Jan de Liefde, who had founded a Free Evangelical Church on the island of Ameland.

In October 2009 the Reformed and the Mennonites on Ameland entered into a federation, calling themselves the Federatie Doopsgezind Gereformeerd Ameland. The collaboration between the two communities dates from 2003. Every Sunday, services are held alternately in two of the four churches: Hollum, both a church building of the Reformed Church and the Doopsgezinde church, and the Doopsgezinde churches in the villages of Ballum and Nes.