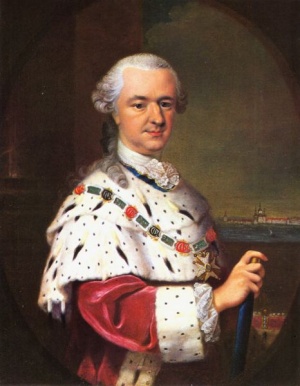 Karl Theodor (Charles Theodore), Elector Palatine of the Rhine, 1742-1799, and Elector of Bavaria, 1777-1799 (Karl IV Theodor, Kurfürst von der Pfalz, Karl II Theodor, Kurfürst von Bayern): born 12 December 1724, the son of Johann Christian von der Pfalz-Sulzbach. Karl Theodor was head of the Sulzbach line who inherited the Palatinate in 1742 upon the death of Karl III Philip, the last of the Neuburg line. In 1777 he also inherited the territories of the Bavarian line and became Elector of Bavaria. He died 16 February 1799 and was succeeded by Maximilian I of Bavaria.

Karl Theodor was a Catholic, educated by the Jesuits, and made it very hard for the Mennonites of his domain throughout his reign. On 18 February 1743 the Mennonites presented a petition to Karl Theodor for confirmation of the concession (Privilegium) of 1664 and a reduction of the annual per capita protection fee from 12 to 6 florins. They repeated the petition on 10 December 1743, and on 30 March 1744 offered to make a free contribution of the 10,000 florins which they had loaned the ruler in 1741, in return for the proposed reduction of the annual fee. Karl Theodor granted the petition on condition that the limit of 240 families in the country be gradually reduced to 200. Mennonite sons would have to receive a special governmental permit to remain in the country after marriage, and new Mennonite immigrants would need the same.

An official inquiry of 22 October 1752 revealed that the number of families had risen to 250, the increase being chiefly in the districts of Alzey, Heidelberg, and Neustadt, since many families had harbored relatives arriving since 1744 who had no official permits, and others also had likewise come into the country illegally. A legal opinion requested by the prince objected to expulsion of the surplus Mennonites, giving as the reason that "no more industrious and capable subjects could be found, who, apart from error in religion and customs and intense zeal, should serve as models for other religious groups." The prince refused, however, to follow this advice and decreed that the previous rulings should be strictly enforced, including the reduction to 200 families. A corresponding decree was issued to all district officials on 23 December 1763. The Mennonites of the Zellertal, who were under the jurisdiction of the University of Heidelberg, did not succeed in getting their annual protection fee reduced until 1769 after a long struggle.

In 1784 the entire Mennonite population addressed a petition to the prince for a cancellation of the special "retract" law, which permitted sellers of land to Mennonites to repurchase it within three years at the original sale figure without regard to any increase in value or improvements. The princely chancellor Raubisson supported the petition, stating that he had always considered the law a harsh one. However, the prince rejected the petition in his decision of 27 September 1787. After Karl Theodor's death the renewed petition of the Mennonites for cancellation of the "retract" law was granted by Elector Maximilian IV Joseph on 28 March 1801, for the right bank of the Rhine, after the French authorities had canceled it for the left bank as early as 1793. The Mennonites of the Palatinate were then gradually treated as full citizens and freed from the payment of the annual protection fee.