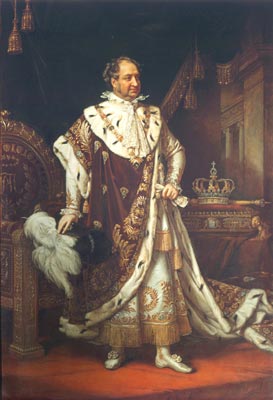 Maximilian I (Maximilian Joseph) was the first king of Bavaria. When he assumed the government in Bavaria as Elector Maximilian IV Joseph of Bavaria (he also became Elector Palatine of the Rhine at this time) on 16 February 1799, he brought about a radical change in the treatment of the Mennonites in the Palatinate. His Jesuit-educated predecessor, Elector Karl Theodor, had passed several suppressive measures, which Maximilian, king since 1805, felt to be unjust, and which he removed in his reforms. By decreasing the Catholic influence on affairs of state, he removed the legal restrictions on the Mennonites and put them on a civil plane with other citizens. On 17 April 1801 the right of redemption (jus retractus; also Gemeinde-Kalender 1912, 120-134) was liquidated. In addition, on 20 October 1811 they were permitted free exercise of their faith, churches without bells, and the regulation of the oath in accord with their wishes.

After the Palatinate was ceded to France, Maximilian Joseph was interested in settling Mennonites on farms in South Germany. A number of German princes sought them out as master farmers (Correll, 130-133). An attempt was to be made to open the Donaumoos, northwest of Munich, for agriculture, leading to the founding of Maxweiler (named after the king) by eight Mennonite families from the Palatinate. The Mennonites also acquired a number of suppressed monasteries (1803) in Upper Bavaria and Franconia, which Catholic peasants, partly because of superstitious reasons, were reluctant to accept (Gemeinde-Kalender 1912, 91, and Correll, 134). Thus the first emigration of Mennonites from the Palatinate and from Alsace took place to southern Bavaria. A large number of the Maxweiler families went to America about the middle of the 19th century, but after 1880 new settlements of Mennonites from Baden and Württemberg were made in southern Bavaria.