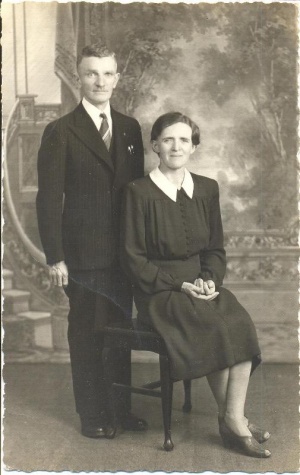 The Schmidt family moved to Nikolayevka (Village #9) in the Terek Mennonite Settlement in 1903. Gerhard was baptized at age 19 in June 1913. Together with his youngest sister Maria, Schmidt immigrated to Canada. They left from Suworowskaja, Caucasus on 13 September 1924 and arrived in Quebec City, Canada aboard the S. S. Minnedosa on 10 October. His first destination in Canada was Camrose, Alberta. The Schmidts were said to have a relative in Canada or the USA, namely a Rev. Heinrich Voth. From Camrose Schmidt gradually moved east, living briefly in eastern Saskatchewan before settling in Manitoba. Gerhard took teacher training at the Winnipeg Normal School.

In the summer of 1931 Schmidt worked as a hired hand on the Kelloway farm near Killarney, just north of Lena, Manitoba. Here Schmidt had Terek connections; the whole clan of Aeltester Franz F. Enns came from the Terek. That fall he began teaching at Plum Hollow School near Lena where he stayed until the spring of 1940. From Lena he moved to teach in the village of Reinland, Manitoba from 1940 to 1945.

While teaching in Reinland he married Helena Wiens at Pigeon Lake, Manitoba in 1944. Gerhard and Helena moved to Sardis, British Columbia (BC) in 1945 where a daughter Irma was stillborn. Diagnosed with cancer in 1953, Helena died in 1955. Gerhard married Katharina Balzer the following year.

In British Columbia, Schmidt taught German, church history and Mennonite history at Bethel Bible Institute, Abbotsford, from 1945 to 1951. He was chair of the Conference of United Mennonite Churches of British Columbia in 1952-1953. This stint was short due to the contentious issue of whether an unordained person could be leader of the conference.

Gerhard G. Schmidt spent his last years in Valhaven, a Church of God in Christ Holdemann retirement home at Abbotsford. Shortly before his death he was admitted to the Menno Home of which he had been a founding board member and executive member.

According to Abram J. Neufeld, one of Schmidt’s earliest students at Plum Hollow, "G. G. Schmidt was the teacher par excellence." He organized meticulously, was well prepared for each day’s classes, fostered discipline and determination, and emphasized intellectual rigor and character formation. According to the school inspector, Mr. Parr, Plum Hollow was "the best of the 80 schools under his supervision" in the Turtle Mountain Municipality in the 1930s. At Plum Hollow Schmidt introduced the teaching of Bible in the German language for half an hour three times a week as allowed under the School Act, was active in Saturday German language teaching, and introduced adult winter evening classes with lectures and discussion on church history and current events. Both in the Lena church and in the village of Reinland he taught Sunday School. In the Lena church he also served on the Jugendvereinskomittee (Christian Endeavour Committee), as youth leader, and as church librarian. In Sardis (later Greendale) Mennonite Church he served as deacon. At Bethel Bible Institute some students found him uncomfortably strict. Besides being an influential teacher and leader himself, numerous of Schmidt’s students became successful farmers, educators, mission workers, and leaders in churches and conferences.