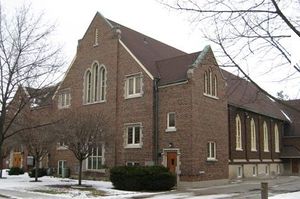 Urias K. Weber, who had been a pastor at First Mennonite for 17 years, became the leader of the new, more liberal group that separated from First, primarily over a dispute involving the traditional dress code for women. Both congregations, now within the same conferences, have worked cooperatively for many years.

During its years as an independent congregation, Stirling occupied a unique position in the Mennonite mosaic. Sometimes at odds with other Mennonite churches, it also acted as a catalyst for change within the Mennonite community.

Membership in 2003 was composed of persons from both Swiss and Russian Mennonite backgrounds, as well as many from non-ethnic-Mennonite backgrounds. Language for worship has always been in English. A Hallman pipe organ was installed in 1967. Major building expansions took place in 1952 and 1992. Missionaries sent from the congregation included Leona Cressman, who served as a missionary in India from 1947-1982, and Alice Bachert who served in Colombia from 1931-1983. Other outreach efforts have included a clothing center since 1972. Carrie Harder was the first staff member to give leadership to the Peace and Justice Centre established in 1988.

Stirling Avenue has participated in the founding of Conrad Grebel College, the House of Friendship in Kitchener, the Waters Mennonite Church (dedicated in 1963), and the Mennonite Coalition for Refugee Support.

The present church building of brown brick, seating approximately 400, was dedicated on 1 February 1925. Until this time services were conducted in the First Mennonite Church on Sunday afternoons. A parsonage was bought in 1950, and the church enlarged in 1952. The membership is about one fourth rural, the remainder living in Kitchener and surrounding towns. U. K. Weber was succeeded in 1942 by Andrew R. Shelly, of Pennsburg, Pennsylvania, who was ordained as elder in 1942. Shelly was succeeded by Wilfred D. Ulrich, the present (1957) pastor. Feetwashing is optional and there is open communion. The membership in 1958 was 460.