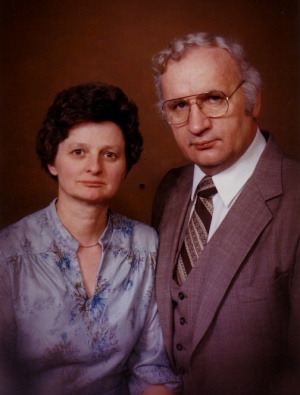 Vernon Roy Leis: pastor; born 23 November 1933 on a farm near Petersburg, Ontario to John S. and Catherine (Wagler) Leis. He was the oldest son and third child in a family of three daughters and two sons. On 2 July 1955 he married Arvilla Anne Schultz. They had four sons and one daughter. Leis died 26 February 1994 in a traffic accident near Baden, Ontario.

In the 1950s a pioneering group of young men from the Ontario Amish Mennonite Conference sought seminary-level theological training to prepare for pastoral service. Leis was one of this number—he studied at Eastern Mennonite College (B.A.), and Goshen Biblical Seminary (B.D), graduating from the latter in 1961. In 1983 he completed a D.Min. at the University of St. Michael's College, Toronto School of Theology.

Always ecumenical in outlook, Leis served the wider Mennonite community, and became a strong voice for cooperation and the conference integration movement in Ontario. He was the last moderator of the Inter-Mennonite Conference (Ontario), and the first moderator of the Mennonite Conference of Eastern Canada (MCEC). He chaired the board of the Mennonite Reporter in 1978, and had terms on the Mennonite World Conference presidium and the board of Mennonite Central Committee Canada. His ecumenicity also extended to the local community; he always encouraged active inter-church ministerials, and frequently participated as a pacifist in community Remembrance Day services. He also instituted an interpretive program (tours, dinner, film, discussion about Mennonites) at the Elmira Mennonite church for the many tourists who visited the Waterloo Region to see Old Order Mennonites. Up to 5000 persons a year participated in this program.

Leis was a strong leader who did not avoid confrontation when he believed it necessary. A firm believer in the Anabaptist vision as articulated by Harold Bender, Vernon Leis had little use for theological fundamentalism. On occasion this led to conflict with members within his congregations which led to persons withdrawing to form or join new congregations. His passionate personality could also make him a challenging colleague. Once characterized as the "most aggressive pacifist we've ever met," he resigned from the MCC Canada board in the early 1980s because he believed too few women were at the board table. Nonetheless he also inspired and nurtured numerous young leaders through the assistant pastor program at the Elmira church that was initiated because of the expanding tourism program.

Vernon Leis was a progressive voice for active Mennonite engagement in the communities in which they lived. His premature death in 1994 silenced a voice that always challenged his church to a "muscular Christianity."

In September 2015 Mennonite Church Eastern Canada (MCEC) issued a release saying it had received "an allegation of sexual and ethical misconduct" against Leis that was "compelling and credible." Despite MCEC's inability to follow usual investigative procedures because the accused pastor was deceased, after a review process it said releasing the name was "an important step in facilitating the process of healing because it allows the affected parties and the wider faith community to confront a hidden truth and bring it into the light for healing."

In January 2017 Mennonite Church Eastern Canada reported to its congregations that it had received a second formal complaint of sexual misconduct against Vernon Leis, which after investigation it also found to be "compelling and credible." It further indicated that it was aware of other confidential disclosures made by women to trusted professionals about similar sexual misconduct by Leis. These woman had not filed formal complaints with MCEC by January 2017, and thus the area church had not done further investigation. MCEC stated it was important to share this additional information to indicate the misconduct was experienced by multiple women, and to encourage anyone who had been impacted to seek the support of a trusted professional.