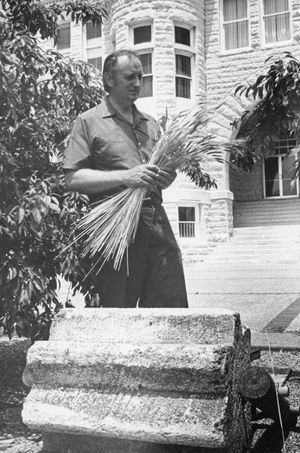 He graduated from Moundridge High School in 1937 and Bethel College in 1941 before attending Garrett Evangelical Seminary and receiving a Bachelor of Divinity degree in 1944, an MA at Northwestern University in 1947, and his PhD in political science from Northwestern in 1949. Stucky's MA thesis was titled, "Cultural interaction among the Mennonites since 1870," and his PhD dissertation was titled, "International control of atomic energy."

Harley Stucky taught history and political science at Bethel College from 1949 to 1959. From 1964 to 1974 he was Vice President for Academic Affairs at Friends University in Wichita, Kansas. Between his work at Bethel and Friends, he taught at Bethany College, Tabor College, and Central State University in Edmund, Oklahoma. While at Bethel Stucky also coached debate and forensics, and he authored numerous books and articles in addition to being a frequent speaker at conferences.

Stucky’s interests outside academia were extensive. He served as president of the Kansas Authors Club, American Historical Association of Germans from Russia, and the Swiss Mennonite Historical Association. He was actively involved with Western District and General Conference Mennonite Church committees and youth leadership in the 1940s and 1950s. He played a primary role in organizing and promoting the numerous wheat and Mennonite centennial activities in 1974. Stucky was ordained and pastored the McKinley Park Methodist Church in Chicago while completing his graduate education. He purchased and worked to restore and protect the Bernhard Warkentin homestead in Halstead, Kansas.

Throughout his life, Harley Stucky was a passionately engaged person who worked to preserve the history of the Kansas Mennonite people.