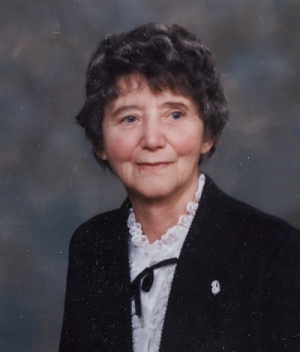 Mary Jesse Toews: teacher and missionary; born 16 December 1910 in Rückenau, Molotschna Mennonite settlement, South Russia. Her parents were Aron A. Toews and Agnes (Harms) Toews. Mary was the second of four children and had three siblings: Agnes, John A. and Nick. In 1926 the Toews family immigrated to Canada, settling in Namaka, Alberta. At the age of 17, Mary became a Christian. She was baptized into the Namaka Evangelical Mennonite Brethren (later Mennonite Brethren) Church in 1927.

After high school, Mary moved to Calgary, Alberta, where she earned her teaching certificate at the Normal School, followed by a five-year teaching stint in the province. During the school year 1939-1940 she continued her education at Prairie Bible Institute, Three Hills, Alberta. In 1945 she enrolled in a summer school at the Summer Institute of Linguistics in Briercrest, Saskatchewan. She pursued further studies at the Mennonite Brethren Bible College, graduating with a Bachelor of Religious Education in 1947.

Responding to a calling to mission work, Mary applied to the Mennonite Brethren (MB) Board of Foreign Missions on 19 April 1946. On acceptance by the Board, she was ordained for service by the Namaka MB Church on 13 July 1947. Mary left North America for her first term of Congo missionary service on 22 December 1947. Her initial assignment was to administer an elementary school with some 20 teachers in Kafumba.  After her first six-year term of service, Mary spent a year in Belgium learning French and securing a Belgium teaching certificate.

Owing to the 1960s political upheaval in Congo, Mary along with other missionaries was evacuated for their safety. During this time she obtained a Bachelor of Arts degree from Tabor College and a Master of Science degree in modern languages from Kansas State University.

By the time Mary returned to the Congo, it was still not safe to resume her work at the inland MB mission stations. She was therefore asked by the Polytech Institute in Kinshasa (formerly Leopoldville) to start a school of home economics for the wives of government officials, providing many opportunities to share her Christian witness with leaders in the newly appointed government.

After she was able to resume her work at the MB mission stations, she started a junior high school in Kajiji and then commenced teaching in a senior high school in Kikwit. Numerous of her Congolese students went on to earn graduate degrees, becoming prominent leaders in their country.

Owing to increasing attacks of malarial disease, she was forced to return to Canada in 1972 after 25 years of service in the Congo. She settled in Abbotsford where she worked as a substitute teacher in the local school system and cared for several disabled women. To her great delight, she was able to visit the Congo in March 1989, being warmly welcomed back by many former friends and colleagues.

She died on 28 February 1999 in British Columbia. The funeral service was conducted in the Clearbrook MB Church.

Toews, Mary J. God’s Rainbow of Promises from the Northern Lights to the Southern Cross. Clearbrook, BC: Memories Desktop Publishing, 1991.