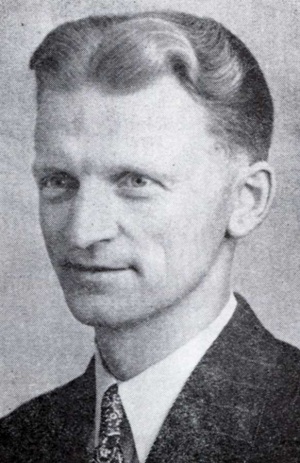 Isaac Epp: pastor and teacher, was born 14 May 1912 in Waldheim, Saskatchewan, to Jacob H. Epp (21 July 1876-8 July 1963) and Helen Ens Epp (9 November 1877-9 June 1954). He was the ninth child out of a total of 12. He received his elementary and high school education in Waldheim. At the Hepburn Bible School he completed a four-year theological education course followed by teacher training at the Saskatoon Normal School, Saskatoon, Saskatchewan. On 1 October 1938 he married Gladys Viola Dirks (1917-1965); they had one daughter and two sons. Gladys was active in music as an organist and choir director.

Waldheim Mennonite Church installed him as evangelist on 5 June 1938 the, and on 2 October 1938 he was ordained to the ministry by David Toews. For two years he served as minister for the churches in the Swift Current district, and for three years the church in Prince Albert where he began a radio ministry "Wings of the Morning." His ministry focused on young people and he was active in youth work both in Saskatchewan and British Columbia. He served as the editor of the Conference of Mennonites in Canada magazine: Young People's Messenger. During his ministry he taught in many Saskatchewan communities, including Capasin, Aberdeen, Springfield, Waldheim, Richmond and Mennon. At the time of his death he was principal of Drake, Saskatchewan, Public School.

Isaac's and Gladys' lives came to an abrupt end when they died in a car accident during a snow storm on 28 December 1965. They are buried in the North Star Mennonite cemetery in Drake, Saskatchewan.