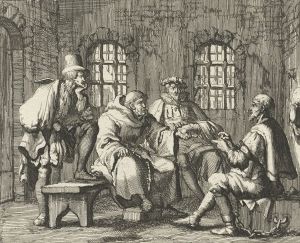 Herman van Vlekwijk (Vleckwick) was an Anabaptist martyr, burned at the stake at Bruges, Belgium, on 8 June 1569. He was born at Kervendonck in the Duchy of Cleve, Germany, and was a tailor by trade. In Bruges he attended the Mennonite meetings in 1561, but upon being arrested he recanted. However, he soon repented of his apostasy. Then he left Bruges and traveled around. In 1562 he was baptized at Ghent by Hans Busschaert. During the following years he was on the road, sometimes in Bruges or other towns in Flanders, but mostly staying in the territory of Cleve, where he participated in the Mennonite meetings. In 1565-1568 he lived in Bruges. But in 1568 he had to flee because of persecution and again he turned to Germany; the next year he planned to make a short trip to Bruges to settle his affairs, having resolved to stay in Cleve for the future, leaving his wife and five children at Cologne. On his way to Flanders he met Jacob de Rore (Jacob de Kaarsengieter) in Nijmegen; together they journeyed to Bruges, but arriving here they were immediately arrested and put in prison. Herman was tortured several times but remained steadfast and refused to betray his fellow members. On 10 May 1569 he had a long dispute with the Franciscan friar Cornelis Adriaensz (Broer Cornelis), who tried to bring him back to the Catholic Church, which has been printed in van Braght's Martyrs' Mirror. Herman and Jacob de Rore died together at the stake.

In the disputation between Herman and Broer Cornelis, the friar accused Herman of anti-Trinitarianism. Hans Alenson related that Herman was a follower of Adam Pastor and a unitarian (BRN VII, 196). The matter is not quite clear.

Very likely Herman van Vlekwijk, like most Mennonites and nearly all the martyrs, objected to the word "Trinity," since this is not found in the Scriptures. He preferred Scriptural terms and avoided theological or philosophical terminology. At any rate he was not a Unitarian, for he positively confessed the deity of Christ.

Braght, Thieleman J. van. The Bloody Theatre or Martyrs' Mirror of the Defenseless Christians Who Baptized Only upon Confession of Faith and Who Suffered and Died for the Testimony of Jesus Their Saviour . . . to the Year A.D. 1660. Scottdale, PA: Herald Press, 1951: 774, 785-798. Available online at: http://www.homecomers.org/mirror/index.htm.

Haeghen, Ferdinand van der, Thomas Arnold and R. Vanden Berghe. Bibliographie des Martyrologes Protestants Néerlandais. II. Receuils. The Hague: M. Nijhoff, 1890: I, 703 cites a booklet, A Dialogue between a Dutch Protestant and a Franciscan Friar of Dort (London 1784, repr. Birmingham 1812), which is the disputation of Herman with Broer Cornelis.