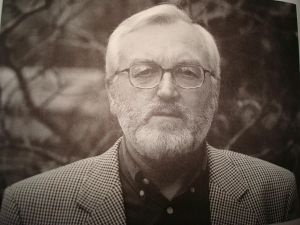 Sjouke Voolstra: leading scholar of Dutch Anabaptist-Mennonite history and theology, was born 26 March 1942 to Anne Wolters Voolstra (21 April 1904-29 April 1972) and Antje Gerbens Sipma (19 May 1904-20 March 1961), a Mennonite farming family in a hamlet near Akkrum, Friesland, Netherlands. Sjouke was the oldest of four children. Sjouke Voolstra attended the Openbaar Lyceum in Heerenveen. He subsequently enrolled in the University of Amsterdam, studying theology, and in the Amsterdam Mennonite Seminary for his pastoral training. He was married to Trynke Bottema, who gave birth to their two daughters, Gerbrich and Anna. Sjouke Voolstra died suddenly of drowning while sailing his boat "Gratia" near Enkhuizen on 12 October 2004.

Even before graduation Voolstra started his career as a pastor of a newly-founded ecumenical congregation the province of Flevoland (1970-1972). He then served the Mennonite congregations of Goes, Middelburg and Vlissingen (1972-1978), Eindhoven (1978-1982) and Amsterdam (Singelkerk; 1982-1984). Along the way Voolstra completed his PhD under Irvin B. Horst and J. A. Oosterbaan at the University of Amsterdam. His dissertation, Het woord is vlees geworden: de melchioritisch menniste incarnatieleer (Kampen, 1982), was a masterpiece of research that reappraised a previously neglected feature of Mennonite "orthodoxy," the incarnation theology of Melchior Hoffman, the father of Dutch Anabaptism.

In 1981, Voolstra was appointed as a part-time lecturer in Christian theology and ethics at the Amsterdam Mennonite Seminary. In 1984 his appointment became a full professorship in philosophy of religion and ethics at both the Seminary and the University of Amsterdam, as the successor of J. A. Oosterbaan. With I. B. Horst's retirement in 1988, he also became a full professor in Mennonitica (the history of Dutch Anabaptism-Mennonitism). From 1990 until 1995 Voolstra served as dean of the Mennonite Seminary. He took an early retirement from his seminary and university positions in 2004.

Talented and passionately devoted to the spiritual well-being of his Dutch fellowship, Voolstra acted simultaneously on many fronts: as an ordinary church member of his local congregation, as a skillful theologian and visionary church leader, and as a widely esteemed scholar of Anabaptist-Mennonite history.

As a nationally-recognized theologian and church leader, Voolstra was an ardent promoter of a biblically-rooted Mennonitism, which had been rather oppressed since the days of 19th and 20th century Mennonite liberalism and latitudinarianism. In a variety of popular articles, theological tracts and policy papers, as well as in his seminary classes and public lectures, he pleaded for a confessional form of Mennonitism, characterized by a modern interpretation of the Gospel and historically inspired by the work of Menno Simons. Voolstra, like Menno, took up the "sword of the Word" against postmodern and pseudo-religious Mennonitism, which had also been affected by secularization and individualism. To his frustration, however, positive responses to his visions and opinions became gradually overruled by growing opposition. He therefore could not hide undertones of skepticism and cynicism in his later pastoral writings.

As a Mennonite historian, Sjouke Voolstra's reputation steadily grew over the years, although he modestly claimed to be primarily a theologian, who dealt with history as "only a hobby." His relevance for Mennonite historiography can hardly be overestimated. Among his many accomplishments, Voolstra was a co-founder of the Doopsgezinde Historische Kring (DHK, the Dutch Mennonite Historical Society) in 1974 and an editorial board member of its new series of Doopsgezinde Bijdragen, until his death (editor in chief from 1988-1994). From 1983 to his death he was a vice president of the committee that published the renowned Brill series "Documenta Anabatistica Neerlandica." He was also an editorial board member of two series, one focused on local/congregational Mennonite historiography and the other on post-1600 Mennonite manuscript and archival sources.

Sjouke Voolstra also edited or co-edited four older Anabaptist-Mennonite sources in the "Doperse Stemmen" (Anabaptist Voices) series, which were reworked into a more popular style to suit a wide readership of church members. This was fully in line with one of the main goals of the DHK: to sharpen contemporary Mennonite identity by encouraging a true dialogue with tradition, as shaped by early church leaders and their writings. Voolstra never gave up this goal, which also marked the consistency of his main historiographical paradigm, for which the Bible ultimately set the norm. Not only as a theologian, but also as a historian, he criticized the liberal, normative approaches of predecessors like Kühler, Van der Zijpp and Meihuizen, who had favored spiritualistic, non-confessional and individualistic tendencies in Dutch Anabaptism-Mennonitism.

Voolstra's scholarly output numbers more than 60 titles. His scope was twofold. A majority of his articles dealt with Menno Simons and his theology. Particularly groundbreaking were his essays on Menno's views of penance, justification and restitution, as well as on related subjects like Gelassenheit and spiritualism, all thoroughly analyzed and explained in the broad context of early Reformation theology, the tradition of the Catholic Church and Erasmian criticism.

Two of those articles were published in Mennonite Quarterly Review (1983 and 1988). To a lesser extent, Voolstra also published on topics related to Dutch Mennonite history of the 19th century, mainly analyzing the shift from biblical confessionalism to bourgeois liberalism. As such he was one of the most inspiring contributors to From Martyr to Muppy (Amsterdam, 1994). Perhaps the best results of this twofold focus were presented during the Menno Simon lectures in 1996 at Bethel College, which were published in Menno Simons: His Image and Message (North Newton, Kansas, 1997). During his last years Voolstra studied former conservative branches, like the Danzig Old Flemish Mennonites, with great eagerness.

Scholars of Dutch Anabaptist-Mennonite theology and history are greatly indebted to Sjouke Voolstra's major contributions to these fields of scholarship. The Dutch "Doopsgezinde" community owes much to this man of visionary views and outspoken opinions that were, paradoxically enough, both conservative and radical at the same time.