Mennonite Yearbooks (Jahrbücher) are annuals published by Mennonite conferences or individuals, have been of five types: (1) almanacs with some popular religious, literary, educational, historical, or practical material; (2) statistical handbooks giving primarily a directory of congregations, ministers, institutions, and conference organizations and officers, with membership (and financial statistics) with or without some summary reports of the year's church occurrences and activities, sometimes combined with (1); (3) minutes of annual or other conferences (may be called yearbook even though the period covered may be several years), plus ministerial and missionary directory; (4) purely a directory of congregations with membership and ministerial listings; (5) purely literary or historical annuals. Some yearbooks are very small and some large, both in pages and format. Some are distributed free and some sell for substantial prices, and one or two have large editions. One, the Mennonite yearbook, in the 1950s attempted a world-wide coverage of Mennonite ministerial lists and group membership, and had an edition of 12,000. The following list is chronological and not descriptive nor bibliographically complete. The titles of the yearbooks have in some cases changed erratically, as well as has the scope of the coverage geographically, the type of content, size, and place of publication. 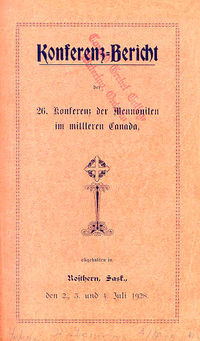 Conference of Mennonites in Canada yearbook from 1928. 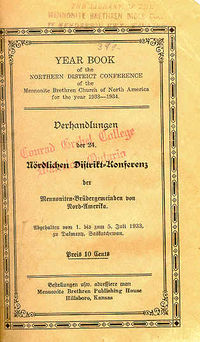 This article seeks to describe changes which have occurred since 1959. Titles that have begun or ceased publication are included. The general purpose and use of yearbooks remain much the same. However, attention should be called to a few developments over the past 30 years.

The general classification of directory material published by various bodies remains much the same. No official body publishes almanac information along with directory material. Privately published almanacs do contain directory material; e.g., Der Neue Amerikanische Calendar by Raber and its English equivalent. This almanac in revised form was first issued in 1970 and contains Old Order Amish ministerial and congregational directory. (A large number of unofficial local Amish directories have begun to appear.) European Mennonite yearbooks continue to include literary material such as biographical and historical articles.

The titles of these publications have not changed and include words such as "yearbook," "handbook," "directory," or "report." The name usually depends on the content and purpose of the publication. The frequency of publication varies depending upon the publication policy of the respective body. Some have changed from annual to biennial; e.g., for several years in the 1980s the Mennonite Yearbook (MC), even though still contained the word "yearbook" in its title. When minutes of proceedings are included the frequency depends upon the general meetings of the body, whether annual, biennial, or triennial. Frequency also is determined in some instances on the cost of collecting, compiling, editing, and publishing the directory.

The purpose and use of these publications remain much the same in that they provide useful information for members, lay leaders, ministers, and personnel in organizations and institutions.

Three general organizational groupings may be listed as issuing yearbooks and directories: (1) Some congregations issue directories or yearbooks, in some instances containing pictures of members; these directories list ministerial staff, organizations, membership, and activities of the congregation. (2) District and regional conferences, mission boards, and education, publication, and inter-Mennonite agencies also publish directories. (3) Some Mennonite churches in India, Africa, South America, Central America, Japan, and elsewhere, publish booklets containing conference proceedings with or without directory material. (4) Most Mennonite and Brethren in Christ conferences in North America and Europe publish yearbooks or directories. This article is concerned with the fourth group.

Directory publications that were not listed in the 1958 article or which have been changed or newly established include the following: Minutes of the General Conference (Brethren in Christ, 1871-); Proceedings of Mennonite World Conference (issued for the assemblies held since 1925); Mennonite world handbook (issued first in 1978 with supplement 1984; revised new edition in 1990; annual updating of some data in MWC Courier); EMC Yearbook (Evangelical Mennonite Conference); Mennonitischer Gemeinde-Kalendar (1950-70, South German Mennonite Conference); Directory (Eastern Pennsylvania Mennonite Church, 1970-); Yearbook (Conference of Mennonites in Canada, 1903-1995); Year book (MB General Conference). In Europe the following directories continue to be published: Mennonitisches Jahrbuch, containing information about German-speaking Mennonites in Germany, Switzerland, France, Austria, and Latin America; Doopsgezind Jaarboekje (The Netherlands). French Mennonites publish an annual directory as part of their periodical, Christ Seul (Christ Only). -- Ellrose D. Zook