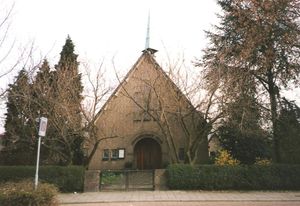 Zutphen, a town in the Dutch province of Gelderland (pop. 24,000, with 106 Mennonites in 1959; pop. 46,164 in 2005), the seat of a Mennonite congregation. Concerning the history of Anabaptism-Mennonitism at Zutphen there is little information. Early Anabaptism seems to have had few adherents here in the 1530's, but there was some Anabaptist activity in 1548, when the magistrates discovered that the schoolteacher Claes van Leeuwen had been an Anabaptist; his corpse was exhumed and burned, and his wife Cornelia was executed in 1549. A few others of the small group saved their lives by flight.

Not until 1613 is mention made of Mennonites at Zutphen; in that year there were two Mennonite congregations here, one Flemish and one Waterlander, which may have been founded in the 16th century. The Flemish congregation was represented at the Flemish conference at Haarlem in 1649. During the 17th century the Mennonites of Zutphen, as of most other towns, were often disturbed by the local magistrates at the instigation of the Reformed clergy. Not until 1697 did they acquire a meetinghouse, having held their meetings in the homes of members and later in an attic on a back street. In 1697 they bought a warehouse on Molenstraat and remodeled it as a meetinghouse. It is not certain whether this is the same meetinghouse as the church on Apestert, which was later used, remodeled in 1802, enlarged in 1852, and used until 1940. A new church was built on Leeuweriklaan, dedicated on 10 December 1940.

This small congregation had the misfortune of being at variance with some of its preachers: Jan Francken was suspended in 1731 because of misconduct; Hendrik Gortinga, who was an Organist, whereas nearly the whole church sided with the Patriots, was bought out in 1795; Jan de Liefde's pietism caused much unpleasantness from 1843 until he retired in 1847. The pastor of Zutphen has since 1956 also served at Winterswijk. Among the old Mennonite families are the Schimmelpennincks, usually wine merchants, and particularly the de Haas family, whose members were for 200 years pillars in the Zutphen congregation. To this family, which died out in the male line in 1878, the congregation owes much, both spiritually and materially; many of its members served as deacons.

In recent years the meetinghouse has also been used by Remonstrant and Seventh Day Adventist congregations.